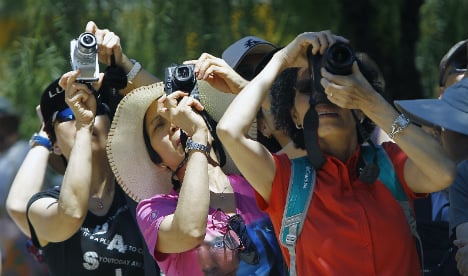 The city council of left-wing mayor Ada Colau is trying to find ways to increase its return on the millions of tourists who visit Barcelona each year even those who don't spend the night in the Catalan capital.

Barcelona councillor Gala Pin confirmed on Friday that the city was investigating a “tourist tax” that would apply to visitors who do not stay overnight in the city.

The idea was first mooted in January when the council proposed that a 'daytripper tax' would help “share the benefits” of the tourist sector throughout the city and “offset the costs”.

The tax would particularly apply to cruise passengers and those on organized tours, who tend to spend mere hours in the city before moving on.

In the case of coaches, a road toll or increased fees for parking in the city could be a way to impose the tax, reported Spanish daily El País.

Pin was speaking on Thursday morning during a presentation of a report on the economic impact of cruise ships on the city and its port.

The report found that cruise ships generate a spend of €800 million per year, adding €413 million to Catalonia’s GDP – €152 million in taxes and the rest in providing employment for 7,000 full-time workers.

But the taxes currently only apply to cruise ships that dock in Barcelona’s port for over 12 hours; boats that dock for less time pay nothing – something the city is keen to change.

While concrete details of the plan have yet to be announced, councillors seem determined to offset the sometimes harmful impact tourism has on the city.

Tourists are expensive for the city, Gala Pin said in January, “not only in terms of infrastructure, cleaning and security but also in terms of the floating population that is causing the indirect expulsion of local people…”

A city break hotspot, Barcelona has in recent years, become steadily fed up with tourists, who have been causing various problems, form antisocial behaviour to pushing up rent prices, forcing locals out of the centre of the city.