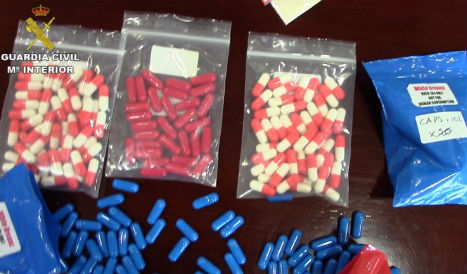 There have been four deaths in Germany recently due to overdoses of synthetic marijuana and police suspect the ring supplied the drugs involved in at least one of the cases, the head of Spain's Guardia Civil police force, Arsenio Fernandez de Mesa, told a news conference.

Psychoactive substances, or “designer drugs” are designed in laboratories to replicate the effects of other already banned substances.

They suspect the ring imported the drugs in bulk from China and then divided it up and packaged it in individual doses in Spain which they then sold online across Europe, mostly in Germany, at €10-20 ($11-22.50) per dose.

Synthetic marijuana is made of dried plants like oregano or basil that are sprayed with a variety of chemicals which when smoked or ingested produce a “high” that is similar to naturally grown cannabis.

Designer drugs are marketed with “brand” names such as Black Mamba, Twilight and Sexy Monkey and are often sold at small retail outlets and via the Internet as herbal products.

The most common side-effects of the drugs include agitation, rapid heart beat, drowsiness, lethargy, vomiting, and confusion.

In a second operation police said they had smashed an unrelated ring that also made and distributed synthetic marijuana as well as synthetic cathinones, which deliver a high similar to that of methamphetamine and cocaine.

Police detained 43 people, mainly Spanish nationals, and seized 10,000 doses of synthetic drugs in raids of over 60 shops across Spain, mainly in the southern region of Andalucia where the ring was based.

“These important operations have removed from the market substances that can be lethal,” Fernandez de Mesa said.

Spanish police said in a statement the two operations were among the biggest in Europe so far against new psychoactive substances.

The two operations were carried out in cooperation with police in Britain, the Netherlands, Belgium, Portugal and Germany.