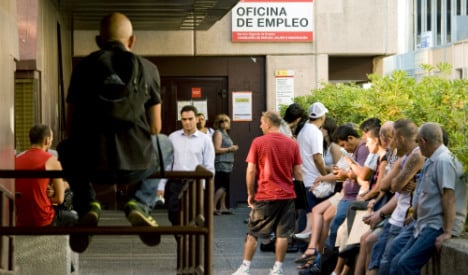 People line up outside a job center. Photo: AFP

Spain is only just emerging from a damaging crisis that has seen its unemployment rate rise to dizzying heights – second only to Greece in the European Union – and the ruling conservatives have made creating jobs one of their priorities as fresh elections loom.

The INE statistics agency said unemployment rose 0.1 percentage points compared to the last quarter of 2015, with 11,900 more people seeking work over the first three months of the year.

Spain relies heavily on tourism, which accounts for 11 percent of its economic output, and the winter months traditionally see fewer tourists than in the higher-peak spring, summer and autumn.

The rise was triggered mainly by a drop in temporary contracts compared to the previous quarter.

But there were 52,400 more workers on stable, fixed-term contracts.

Spain's conservatives, who came to power in 2011, implemented a tough austerity programme as the country teetered on the edge of bankruptcy, cutting spending and raising taxes in a bid to stimulate growth and reduce unemployment.

Last year, the Spanish economy, the eurozone's fourth largest, expanded by 3.2 percent – one of the fastest growing rates in Europe.

Unemployment also dropped to 20.9 percent in the last quarter of 2015, although critics said many of the jobs created were precarious and poorly paid.

The issue of unemployment is likely to be high on the agenda of competing parties as Spain gears up for fresh elections after coalition talks broke down following inconclusive December polls.