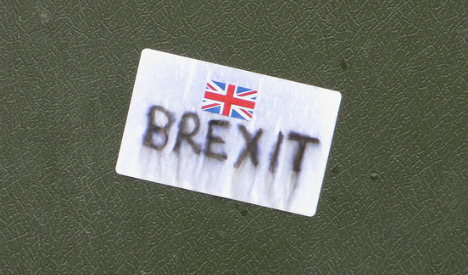 Lawyers acting for the two British expats who launched the legal battle have confirmed they will seek leave to appeal directly to the UK's Supreme Court following their failure to convince two judges to overturn the rule.

Some two million British expats living in the EU, including tens of thousands in France and Spain, are barred from voting in the crucial June 23rd referendum because they have lived outside Britain for longer than the 15-year cut off point.

Despite them facing the prospect of becoming “resident aliens” if the British public votes to quit the EU, judges at the High Court in London refused to overturn the 15-year limit in time for the referendum.

“I'm absolutely appalled. This referendum affects us more than anyone else. To think that we could be forced out of Europe by people voting in Britain who have no idea about how we live and depend on the EU is beyond belief,” said France-based Brian Cave.

“This reflects the attitude in the UK that if you go abroad then you have no longer any interest in the UK. I am deprived of the vote and it's absolutely ridiculous.”

My inability to vote in my native country in a referendum that directly affects me is a scandal. Full stop. #Brexit https://t.co/827bpLwCrq

Most affected group many denied a vote in referendum-we may lose houses, business, jobs ,right to work but no say https://t.co/Sw0RjHNz2c

Italy-based Harry Schindler one of the two expats who launched the High Court challenge was equally upset by the ruling.

“I’m disappointed but more than that, I’m saddened that after all these years there are still people fighting for the right to vote in democratic Britain,” he told The Local.

“I am now appealing to David Cameron to ask him, through parliament, for an amendment to be put to the referendum bill that would allow us to vote. I will also take to the Supreme Court – the last stage. The battle is not over.”

Lennox Napier, a campaigner living in Mojacar, southern Spain told The Local of his frustration with the decision.

“We ex-pats feel that we have no voice, no representation, no champion. There are a huge number of us: patient, wise and well-travelled, waiting and able to do our part if only we were called. But there's no one there,” he said.

The High Court heard arguments that the ’15 year rule’ acted as a  penalty against British citizens for having exercised their free movement rights.  The rule prevented them from participating in a democratic process, the result of which might bring to an end the very EU law rights on which they rely and base their working and private lives every day.

However Lord Justice Lloyd Jones and Mr. Justice Blake stated in the ruling that they accepted the Government’s claims that there were:  “…significant practical difficulties about adopting especially for this referendum a new electoral register which includes non-resident British citizens whose last residence the United Kingdom was more than 15 years ago.”

They continued: “In our view, Parliament could legitimately take the view that electors who satisfy the test of closeness of connection set by the 15 year rule form an appropriate group to vote on the question whether the United Kingdom should remain a member of the European Union or leave the European Union.”

Following the judgment Richard Stein, the lawyer from Leigh Day representing the claimants, said: “We are obviously disappointed that the High Court has denied us the opportunity to challenge the decision by the Government to exclude British citizens from the EU referendum.

“We now intend to take the legal battle to the Supreme Court, the highest Court in the country, so that all British citizens living elsewhere in the EU can be part of the democratic process to vote in this referendum which will have a very real impact on their lives.

“We believe that there is precedent for fast track legislation being put through Parliament in a matter of days in response to court judgment, so  there would be no need for the referendum to be delayed if the Supreme Court rules in our favour.

“Since this is a vote in a referendum rather than in an election there is no need to link the votes of Britons in Europe to any particular constituency in the UK.   Possession of a British passport should be enough.”

Speaking after the judgement  the judgment, Belgian-based expat Jacquelyn MacLennan said: “The Government made a manifesto commitment to enfranchise all British citizens, no matter how long they have been abroad.

“They said they thought that “choosing 15 years, as opposed to 14 or 16 years, is inherently like sticking a dart in a dartboard” and that “if British citizens maintain British citizenship that brings with it rights, obligations and a connection with this country, and that that should endure.

“We just want the Government to keep its promises.”

Some Brits however appear to support the idea that expats should not get the vote in the referendum.

@TheLocalFrance Good. Live in France, pay taxes in France, vote in French elections. UK has nothing to do with you