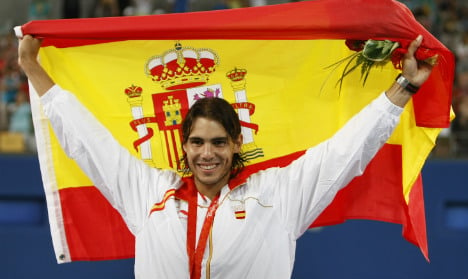 Nadal after winning a gold in the Beijing Olympics, 2008. Photo: AFP

The nine-time French Open champion, who will turn 30 at the start of June, won singles gold at the Beijing Olympics in 2008 and he was chosen to carry the national flag at London four years later.

A knee injury prevented him from fulfilling that role and in the end it was NBA basketball star Pau Gasol who led the Spanish delegation into the Olympic stadium.

At the time Nadal said that having to renounce from carrying the flag was one of the most difficult and saddest decisions he had ever made.

“Spanish sport had a debt to pay back to Rafael Nadal,” said COE chief Alejandro Blanco. “He has done so much, so much more than just his results.”

The tennis star posted a message on twitter speaking of his pride at being chosen.

Nadal struggled for form last year as injuries held him back and he even lost his French Open crown to Stan Wawrinka.

But after a sticky start to this year, he has rediscovered some of his old form, winning back-to-back claycourt titles at Monte Carlo and Barcelona and he will once again be among the favourites for Roland Garros, which starts on May 22nd.

On Monday the fourteen-time Grand Slam champion filed a lawsuit in Paris against former French sports minister Roselyne Bachelot after she accused him of covering up a failed drugs test.

He then asked for the results of all drugs tests he has taken in his career to be released to the public so that he could clear his name after the slur.