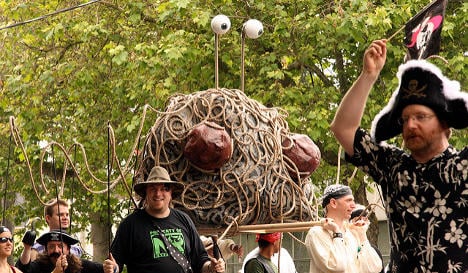 The Flying Spaghetti Monster at a parade in Seattle, Washington. Photo: Lee LeFever/Flickr Creative Commons.
The Flying Spaghetti Monster church in the port town of Alicante is hoping to get the greenlight to use the city's official band for a sermon on the Costa Blanca beach of Playa del Cocó.
The group wrote an official petition this week to the Alicante City Hall, asking to use the band for a special religious ceremony on the beach, a spokeswoman from the local government confirmed to The Local.
“The city hall will have to respond because it was an official petition,” Alicante city spokeswoman and member of leftist party Guanyar Alacant, Paloma Serrano, told The Local.
Serrano explained that the event was like a form of protest against the city because the band had been allowed to participate in the Easter Holy Week festivities, which the spaghetti monster group is against, arguing that public resources should not be used for religious events.
In particular, the Pastafarians are asking to have the band play such tunes as the “Hymn of Paquito the Chocolatier” between 12pm and 2pm during the May 8th ceremony while their reverend speaks a few words.
“I think it's a bit of a risk because if the city responds, then it becomes something serious and official, but we think that it's a joke,” Serrano said.
The Church of the Flying Spaghetti Monster (FSM) was established in the United States in 2005 as a satirical way to protest fundamentalist Christians pushing for the intelligent design theory to be taught in schools.
Equal time should be devoted to the idea that science alone could not explain the emergence of life as to the theory of evolution, the religious groups demanded.
FSM founder, Bobby Henderson, then called for his beliefs to also be awarded equal time in the classroom if the Christians' demands were accepted.
Since then, the church's Pastafarian followers have spread throughout the world, gathering at noodle masses to eat spaghetti and drink beer.
The group is officially recognized as a church in Poland. the Netherlands and New Zealand, where a couple was recently wed in the first ever government-sanctioned ceremony within the church.
Spanish Pastafarians have continued to fight for their own recognition in Spain and the group is currently crowdfunding a new effort to get listed as an official religious entity.
“We hope to have the support of all worshippers of the Flying Spaghetti Monster as well as those who believe that it is just as plausible to have a God who created the world in one week as it is to have one made up of pasta and meatballs,” wrote the Spanish group on the crowdfunding site.
Pastafarians often wear colanders on their head, believe that humans descended from pirates (“the original Pastafarians”) and that in the afterlife they can look forward to a heaven complete with a “beer volcano and stripper factory”.
“Elements of our religion are sometimes described as satire and there are many members who do not literally believe our scripture, but this isn’t unusual in religion,” the main FSM website states.
“A lot of Christians don’t believe the Bible is literally true – but that doesn’t mean they aren’t True Christians.”