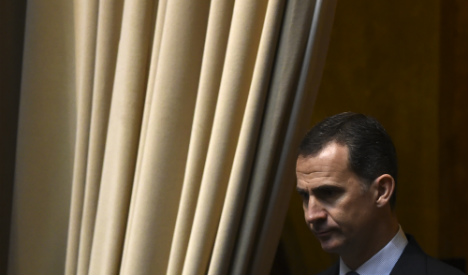 King Felipe has a difficult job ahead. Photo: AFP

The monarch will wrap up the talks – his third round since an inconclusive December 20th election – on Tuesday by meeting with acting Prime Minister Mariano Rajoy, who said over the weekend he was ready for new polls.

“I am in shape and eager and willing once again to do battle,” Rajoy told a party meeting on Sunday in the southern city of Cordoba.

Parties have tried in vain to agree on a coalition government since the elections resulted in a hung parliament divided among four main groupings, none of them with enough seats to govern alone, as voters fed up with austerity, unemployment and corruption flocked to upstarts.

A new government must be in place by May 2nd, or the king must dissolve parliament and call a new election for June 26th.

That would leave Spain, the eurozone's fourth largest economy, without a fully functioning government for at least two more months.

Barring a last-minute surprise, the king is expected to call the polls after his talks with Rajoy whose conservative Popular Party (PP) came in first place in the election but lost its majority in parliament.

The election left Spain in uncharted waters as the country has never had a coalition government since it returned to democracy following the death of long-time dictator Francisco Franco in 1975.

Rajoy turned down a bid to form a government due to a lack of support from other parties who shunned the PP because of its links to corruption scandals and its harsh austerity measures.

The king then turned to the Socialists, who came in second.

Socialist leader Pedro Sanchez struck a deal with centrist upstart Ciudadanos – but this did not give both parties enough seats to get a majority in parliament for the necessary vote of confidence.

So Sanchez tried to reach an agreement with new far-left party Podemos, whose 65 parliamentary seats would have got it through, but failed.

“Now that there is no more bipartisanship or absolute majorities, no one seems to master the new rules of the game, which are none other than dialogue, negotiating and reaching agreements,” the head of the Socialists' Catalan faction, Miquel Iceta, told reporters on Friday.

Other European nations have also endured months without a government recently after inconclusive elections.

Belgium needed 541 days to form a government following a 2010 election, a European record.

Polls suggest fresh elections will not break the political stalemate, with the results likely to be similar to those of December with no party obtaining a majority.

The surveys show Podemos may lose votes as some of the five million people who backed the anti-austerity party last time accuse it of blocking the formation of a left-wing government that would have ousted the conservatives, in power since 2011.

To prevent this from happening Podemos could forge an alliance with smaller Izquierda Unida, a communist-green party headed by telegenic 30-year-old Alberto Garzon that got 800,000 votes in December.

The aim would be to surpass the Socialists in new elections, giving Podemos even more influence than it gained in December.

Belen Barreiro, a sociologist who heads the MyWord polling firm, said Spain was “divided into two blocks” made up of the PP and Ciudadanos on the centre-right and the Socialists, Podemos, Izquierda Unida and a collection of smaller parties on the centre-left.

“The question is how everything will move within the two blocks,” she told AFP.

Iceta said he believes it would be “even harder to reach an agreement” on a new government if there are fresh polls.