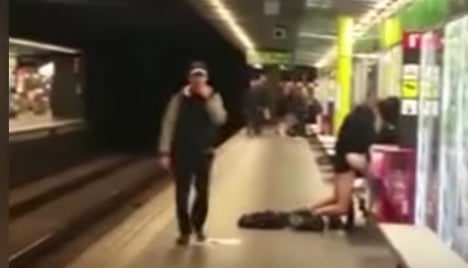 The couple were filmed getting slightly more intimate than is appropriate on Saturday night just before midnight in Liceu metro station in Barcelona.

The video shows a woman sitting on a bench and a man – trousers around his ankles – leaning on top of her.

The couple showed no inhibitions despite the fact that there were several other people on the platform, some who even walked straight past them.

The woman who took the video decided to upload it to social media to report the incident and its inappropriateness.

Barcelona Metro told regional daily La Vanguardia that it was looking for the couple and, once found, would bring charges of antisocial behaviour against them.

Barcelona Metro refused to confirm or deny if this was the first such reported incident of a couple having sex in its public transport network.