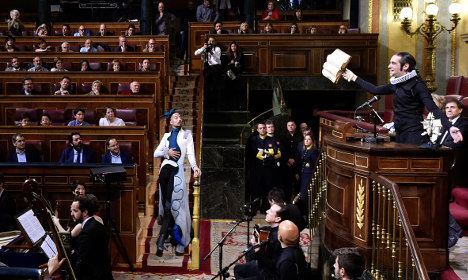 Actors recite passages of Don Quixote as they perform during a commemoration of the 400th anniversary Miguel de Cervantes' death at the Spanish parliament in Madrid. Photo:AFP

“The goal is to make reading more sociable,” said Eva Sagardoy, 36, a member of one of the “commando” teams.

“We library rats are solitary people. We wanted to make reading something that can be shared, like a good meal.”

According to a 2013 European Commission study, 39 percent of all Spaniards had not read a single book during the last 12 months, compared to 32 percent for the entire European union.

The operation was one of around 600 events planned for the Madrid region as part of World Book Night, an annual celebration held in several countries that is designed to spread a love of reading and books.

Bookstores are staying open longer than usual and public libraries are holding special exhibitions and meetings with authors.

Founded in Britain in 2010, World Book Night has expanded to the United States, Ireland, Germany and other European nations.

The event this year comes as Spain marks the fourth centenary of its most famous author Miguel de Cervantes.

Spain's royals and the prime minister will go to Alcala de Henares, where the author was born, to attend the prize-giving ceremony on Saturday for the annual Miguel de Cervantes award, which honours the lifetime achievement of a writer.