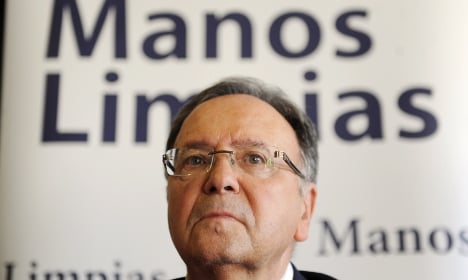 A judge this week ordered the founder and leader of “Manos Limpias” (Clean Hands), retired Madrid city hall employee Miguel Bernad, 74, to be remanded in custody while a probe is conducted into a blackmail and extorsion ring he allegedly ran.

Bernad, who briefly headed the small far-right National Front party, allegedly acted in complicity with the head of Ausbanc, a banking consumers' association, who was also detained.

Police suspect the two groups sought bribes from firms, institutions and individuals in exchange for withdrawing criminal cases they had filed against them.

Clean Hands would also put pressure on banks which Ausbanc blackmailed by pressing lawsuits against the lenders if they did not pay, police said in a statement. Ausbanc helped finance Clean Hands, it added.

The organisation, modelled on and named after the Clean Hands movement launched by Italian prosecutors in the 1990s, has filed hundred of cases since it was founded by Bernad in 1995.

Its most prominent case has been the tax evasion charges brought against Princess Cristina, King Felipe VI's younger sister, in a corruption scandal centred on her husband's business dealings.

Clean Hands pressed the case against her over the objections of public prosecutors and last month Cristina became the first member of Spain's royal family to take the stand in a criminal trial since the monarchy was restored in 1975.

If convicted she faces a jail sentence of up to eight years.

After Bernad was arrested, Cristina's lawyers told reporters that Clean Hands had demanded money in exchange for dropping the charges against her.

Spanish media meanwhile speculated whether Clean Hands may in fact have been driven by a political agenda.

Business daily El Economista reported Thursday that Ausbanc has collected over €600,000 ($680,000) since 2009 in subsidies from the regional government of Madrid and the health ministry, both headed by the acting Prime Minister Mariano Rajoy's conservative Popular Party.

The subsidies were granted even though Clean Hands had filed cases that snared the party's leadership, including tax fraud claims against former Popular Party treasurer Luis Barcenas who is awaiting trial in jail.

According to centre-left daily El Pais, Ausbanc also paid judges across the country to take part in seminars it organised.

A lawyer who used to work for Clean Hands as a volunteer until 2012, who spoke to AFP on condition that he not be named, said the group didn't appear wealthy and that he never saw any overt signs of corruption.

“They didn't have any money. At the most they would buy us lunch,” he said.

But he left the organisation in 2012 because he was “bothered by its secrecy”.

“We never knew who really ran it,” he added.

Bernad, who is openly conservative, has said Clean Hands is financed through contributions from thousands of members.

The organisation, which is run from a modest office in an apartment bloc in central Madrid, has spearheaded cases against a wide variety of defendants, including a children's TV programme that mentioned gay marriage, legal in Spain since 2005.

The graft cases it has filed have entrapped figures from both the right and the left.

One of its favourite targets was former Spanish judge Baltasar Garzon.

In one case, it pressed charges against him after he opened a probe into the disappearance of over 100,000 people during Spain's 1936-39 Civil War and the dictatorship of General Francisco Franco that followed.

The organisation accused Garzon of abusing his judicial powers because the atrocities were covered by an amnesty law passed in 1977, two years after Franco's death.

The Supreme Court acquitted Garzon in 2012, but he was ultimately suspended from the bench after he was found guilty in a separate case.