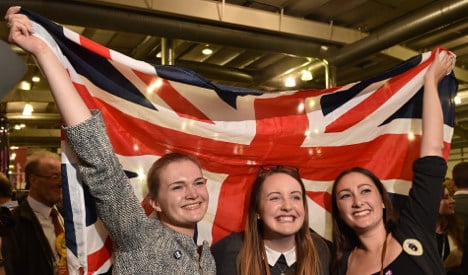 Britain’s upcoming referendum on whether to remain in the EU will have a huge effect on the 2 million Brits living in Europe – and many of these expats have a right to vote.

But will they, and if so, how? The Local surveyed more than 2,700 people across Europe to find out what these expats were thinking.

Our survey revealed that, with over two months to go until the referendum date, 94 percent had already made up their minds: 67 percent were firmly in the ‘Remain’ camp, while 28 percent were planning to vote ‘Leave’.

Expat Maura Hillen, a former Surrey resident and current local councillor in Albox, Almeria, told The Local that a top concern for Brits in Spain is what a Brexit would mean for them financially – what would it mean for their pensions or paying taxes? How would they navigate buying property in Spain as non-EU citizens?

“If we lived in the UK we might think differently, but when you live abroad, I think the financial risks are bigger.”

Hillen is herself an Irish national, married to a British man who “certainly made sure he registered to vote”, but is also the leader of the AUAN group that advocates for the rights of British homeowners in Spain.

“A lot of Brits own property here,” Hillen said of the southern Spanish region she has called home for roughly a decade.

“There’s a lot of uncertainty about how it would pan out.”

When contacted by The Local, a Vote Leave press officer said she was not in a position to comment on expat voters or the impact of the referendum on Brits living abroad.

A spokesman for the Better Off Out campaign, who did not wish to be named, said that their group hadn't had any contact with British expats.

“I can't make a judgment on how expats would be affected by the referendum result – individuals can make their own minds up,” the spokesperson said. “We are concentrating on making a positive case to all voters and hope that those who wish to vote will recognize the benefits for the UK.”

Hillen said that there are many Brits in Spain who lean towards the Leave side because they're worried about uncontrolled immigration, even though they are also immigrants.

“There is a lot of concern generated about the impact of immigration in the UK and I think that that gets a knee jerk reaction from people, even though they themselves are immigrants and don’t always speak the language here,” she said. “There are many ironies in that debate.”

As a full EU member, British people can travel, live and work freely across Europe, and they’re entitled to free healthcare if something goes wrong.

“If we left, no-one can guarantee that would continue,” McGrory (from the Britain Stronger in Europe campaign) said. “The Leave campaigns’ plan for Britain – to pull the UK economy out of the single market altogether – could see every British ex-pat’s automatic right to live abroad thrown into doubt.”

Will people actually vote from abroad?

In order to be able to vote in the referendum, expats need to hold a British passport and to have been resident in the UK within the last 15 years.

But just under a quarter of our overall respondents fit the criteria – a total of 673 people. And of those who had the right to cast a vote, an overwhelming majority (86 percent) said they were planning to do so.

For those in the survey who were not planning to vote, the main reason for abstaining (selected by 49 percent of the non-voters) was that it was too complicated to register.

Meanwhile, 11 percent felt that their vote did not matter, while seven percent didn’t think they would be affected by the outcome of the referendum and a further seven percent did not understand enough about the issue.

Of those who intended to vote in the referendum, only 75 percent had already registered – and of the remaining 25 percent, a majority (68 percent) did not know how to vote.

If you are an expat living in the EU and want to have your say in the referendum but don't know how, read our ten-point guide to registering here.

Some 58 percent of survey respondents said they would be trying to persuade others to vote in a certain way – so don’t be surprised if you find the referendum an increasingly popular topic among your expat contacts.

The most popular method for trying to sway their friends’ votes was in conversation (84 percent), while 46 percent said they would take to social media to spread the word.

“Whatever decision people make, they should make it by being clear-headed and informed,” Hillen said, “and what's most important is to vote, of course.”

Reporting and writing by Catherine Edwards and Emma Anderson