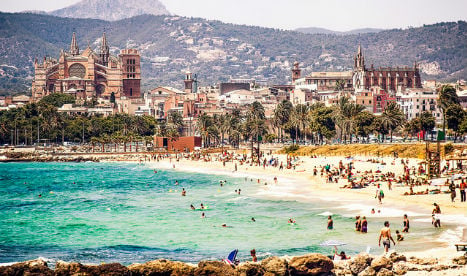 As well as being the favoured holiday destination of Spain's royal family, Mallorca tops the list of Spain's best islands, and was voted the second best island in Europe and the sixth best in the world by TripAdvisor.

The Local takes a look at what makes the island so great. Mallorca has some amazing beaches and dozens of picturesque coves to choose from. Playa de Muro is the top rated beach on TripAdvisor for its white sand and crystal-clear waters.

“A lovely golden sand beach with stunning views of the mountains and hills towering over an aqua-blue sea. It was truly the greatest beach view I have ever witnessed,” wrote one TripAdvisor reviewer. The most impressive site on the island, according to TripAdvisor reviewers, is Le Seu cathedral in Palma de Mallorca, the island’s capital. The gothic cathedral is built on the site of a former Arab mosque. It is one of the highest gothic cathedrals in the world; its nave reaching to 44 metres tall (by comparison, the nave of Notre Dame cathedral in Paris is a mere 33 metres).

“What has to be the most breathtaking free light show I have ever witnessed in a church when, at certain times of the morning, the sun shines through the rose window giving a spectacular beam of coloured light shining onto the floor and pillars, truly not to be missed,” wrote one TripAdvisor reviewer. The island has been a big inspiration for generations of artists, writers and musicians, who have flocked to its shores in search of inspiration. The composer Chopin spent the winter of 1838-39 in Valldemossa along with the French writer George Sand. Chopin was inspired to finish the Preludes, Op 28 that he had begun in 1835, while Sand described her time in Mallorca in A Winter in Mallorca, published in 1855.

Agatha Christie visited the island and wrote a short story about her stay, while the revered Spanish artist Joan Miró married on the island and settled there permanently in 1954. You can visit the Pilar and Joan Miró Foundation in Palma.

The English writer Robert Graves lived on the island for many years and is buried in Deià.

A royal seal of approval The Spanish royal family just can’t get enough of Mallorca and visit the island every year for their Easter and summer holidays. King Felipe is a keen sailor and the family even has an official residence on the island – the Royal Palace of Marivent, in Palma. The whole extended royal family meets here every summer where they are photographed strolling round the shops and taking part in sailing competitions. The Serra de Tramuntana is a mountain range forming the northern backbone to the island. The stunning mountain range has been declared a World Heritage Site by Unesco as an area of great physical and cultural significance.

“The landscape is marked by agricultural terraces and inter-connected water works – including water mills – as well as dry stone constructions and farms,” says the Unesco description of the area. The island is packed with beautiful old towns that are just calling out to be explored and perfect for a wander while you soak up the scenery. TripAdvisor reviewers voted Alcudia, on the island’s northern coast, as their favourite Old Town. The walled-city also has a beautiful beach to relax on when you’ve had enough of strolling through its winding streets.

“A beautiful walled town, well worth an hour or two wandering the little lanes, walking along the walls, enjoying a drink and a meal in one of the little cafes and browsing in all the wonderful shops. Picture postcard at every turn, a wonderful place!” said one TripAdvisor reviewer. Mallorca is not just a paradise for beach lovers and culture buffs – it is home to a wide array of sports, from mountain biking through its hills to the many watersports practised off its shores. And if you’re after a more unusual form of exercise, head to Jungle Parc, a tree top adventure course that is in the top ten activities on the island on TripAdvisor.

If you’re into clubbing and want a tacky week away you can do no better than Magaluf. You might even spot a couple of British bobbies around the resort.

PARTNER CONTENT
The internet is not your doctor: When self-diagnosis goes wrong