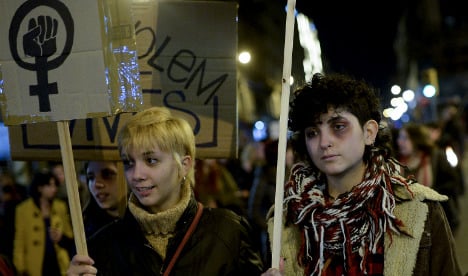 Now the head of a communications agency, this smart, professional 32-year-old found herself trapped in an abusive relationship that had begun when she was just a teenager.

With the initial spark gone, her life deteriorated into a years-long nightmare, eventually forcing her to flee her home town for the shelter, just outside Madrid.

“He would have killed me… and I would have let him kill me,” she says.

Sixty women were murdered in Spain last year – beaten to death, stabbed or burnt by partners or ex-partners.

The figure, however, is down from 71 murders in 2003, the year before the then Socialist government approved a groundbreaking law that the European Council has upheld as an example to follow.

It not only set up a hotline that would not appear on users' phone bills, it also offered free legal aid and established special courts for victims.

The shelter where Cabero ended up is managed – with state subsidies – by the Federation of Associations of Separated and Divorced Women, an NGO that contributed to the law.

A large house of 28 bedrooms, a dining room, nursery, library, gym and even a small theatre, it is an oasis of calm, its location kept confidential for the security of its residents.

Sitting in the sunny garden outside, Cabero recalls how her ex partner used to insult, humiliate and beat her, although never in public and taking care not leave visible marks.

When she was 21, she decided to leave him.

“When my parents weren't there, he would appear at my house at three in the morning and if I didn't open the door, he would pound on the door all night,” she says.

She would sometimes let him in, out of fear, but the violence would then intensify, including sexual attacks.

It was a similar story for Olga Aranda, who admits that without the shelter, she would have remained with a husband who abused her “physically, sexually” for 16 years.

“Where could I go with three babies and without a job?” says the 45-year-old, who took refuge in the shelter in 2005 with her children after sleeping for years with a knife under her pillow.

Like other victims, Cabero and Aranda were given a safe place to live in the shelter for 18 months as well as therapy and professional guidance before being reintegrated into society.

The centre also offers classes in critical thinking run by veteran Spanish feminist and lawyer Ana Maria Perez del Campo, a method that encourages women to challenge traditional gender stereotypes that can lead them to stay in abusive relationships.

In a recent class, the 80-year-old activist led a discussion of phrases such as “Men are violent by nature” and “Men are unable to express their feelings”.

“We are going to criticise everything that we have been taught since the day we were born,” she said.

Psychologist Susana Enciso says that when women first arrive, they suffer from anxiety and depression, extreme fear, low self-esteem, guilt and sometimes denial of their abuse.

She adds that psychological violence can be every bit as damaging as physical abuse.

Still much to do

“Gender-based violence is the consequence of a society… where women are worth less than men in every aspect, including professionally,” says Marina Marroqui, a former victim who heads up a small association fighting the problem.

And while Spain's domestic violence law has brought results, activists say there is still a long way to go.

They point to a lack of specialist training for judges dealing with these cases, and budget cuts that have left small organisations like Marroqui's AIVIG without state subsidies.

Spain is far from the worst off where violence against women is concerned.

According to a UN report last year, 13 percent of Spanish women were physically or sexually abused by a partner or ex-partner, compared to 26 percent in France, 29 percent in Britain and 32 percent in Denmark or Latvia.

One problem is that few victims dare to report their abusers.

“It's very difficult for a woman to talk about all this, first to the police, then to a lawyer who doesn't know anything, then to a judge,” says magistrate Ivana Redondo, regretting that the law does not allow authorities to act if the woman does not want to testify.

“Hopefully there will come a day when centres like these won't be necessary,” says the shelter's director, Rosa Escapa.