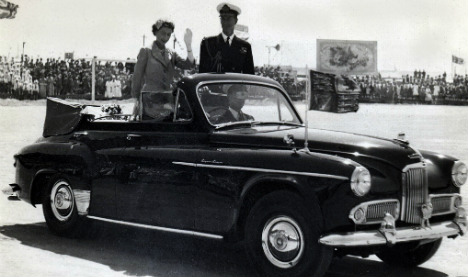 Queen Elizabeth II and the Prince of Edinburgh tour The Rock in 1954. Photo: Gibraltar government archive

The tiny territory at the foot of Spain is proudly British and enthralled with the monarchy, and the majority of the 32,000 population of the Rock think it’s time Her Majesty paid them another visit.

She was last there in 1954 when she toured the Rock with Prince Philip and young Prince Charles and Princess Anne, a visit that is still talked about.

Watch this clip of how Pathe news reported the visit back in 1954:

“I truly envy those of you who were here in Gibraltar in 1954 to see the arrival of this great dashing couple, the very beautiful and inspirational young woman who had just acceded to the throne two years earlier in 1952,” said Chief Minister Fabian Picardo in a birthday message to the Queen.

“I look at those black and white photographs of her being cheered by the entire community, everyone clearly jubilant and I am filled by a great sense of pride in the achievements of this nation under her reign.”

Gibraltar’s leader took the opportunity to express what all Gibraltarians long for.

“Like all of you, I wish she would find the opportunity to visit us here on the Rock,” he said.

Both Princess Anne and Prince Edward have made separate visits to Gibraltar in the last decade where they were greeted with flag waving patriotism from its residents.

Although the Rock was ceded to Britain by Spain under the 1713 Treaty of Utrecht, Spain still claims sovereignty over the disputed territory and diplomatic tensions continue to flare up over the matter.

Worried in the face of a possible Brexit and what it might mean for cross-border relations with Spain, Gibraltarians overwhelmingly fall in the Remain camp, with 88 percent backing continued EU membership in the June 23rd referendum, according to a recent poll in the Gibraltar Chronicle.

The population of 2.6-square-mile peninsula at Spain's southern tip will celebrate the Queen’s birthday in much the same way as those at home, some 5,000 miles away, with a 12-gun salute and the lighting of a beacon, joining the dozens lit across the UK, British Overseas territories and the Commonwealth.

An image of Her Majesty will also be projected on the iconic north face of the Rock itself, clearly visible to those over the border in Spain, it will send a strong message. A projection of the Queen onto the Rock to celebrate the diamond jubilee. Photo: AFP

“Whatever happens on June 23rd, we are and shall remain British and we shall keep our Queen. That is an adamantine pledge,” said Picardo.

“I know I speak with the strongest and most sincere congratulations of us all when I say: 'Happy Birthday Your Majesty. Gibraltar loves you. Long may you live and reign over us',” he said.