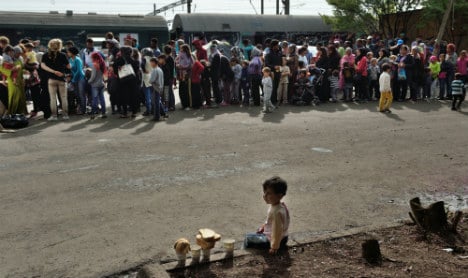 Migrants wait in line at the camp in Idomeni, Greece. Photo: AFO

The lawmakers began their hunger strike on Saturday and are calling on people to occupy public squares for 24 hours on Friday, the day they plan to end their action , in a gesture of support for those people at the centre of Europe's biggest migrant crisis since World War II.

The idea stems “from the shame we felt over the agreement between the European Union and Turkey, seeing how Europe violates internation law,” Podemos lawmaker Pedro Arrojo told AFP.

Under a controversial deal reached in March Turkey agreed to take back all migrants arriving at the Greek islands, in an effort to relieve the pressure on the European Union which has seen over a million migrant arrivals since early 2015.

In return the EU promised to resettle one Syrian refugee for every Syrian taken back by Turkey, capped at 72,000.

Visa-free travel will also be granted to Turks within the border-free Schengen Zone under the deal and Turkey's stalled EU membership bid will be reassessed.

But the EU-sanctioned deportations have drawn sharp criticism, with Human Rights Watch describing them as “abusive” and expressing concern about the fate of the deportees.

Arrojo, who has consumed only water with salt and sugar since Saturday, said he hoped to transform public indignation over the plight of migrants “into action”.

“We have seen that initiatives are starting to bloom. There is a parish that is collecting shoes for refugees,” said Arrojo who represents to northeastern city of Zaragoza for Podemos.

Twenty-four hour assemblies are planned for a dozens cities on Friday, including Madrid, he added.

Podemos was born out of the “Indignado” protest moment against corruption and economic inequality that filled Spanish squares in 2011.

Miguel Anxo Fernan Vello, a lawmaker with regional Galician party En Marea which is allied to Podemos, said he was taking part in the hunger strike because he was angered that Spain has welcomed only a handful of refugees since the migrant crisis started.

Spain's conservative government agreed last year to accept around 16,000 refugees from Greece and Italy but so far only 18 have arrived.

“This is not a failure, this is simply atrocious,” he told AFP.

Over 178,000 people have risked their lives crossing the Mediterranean so far this year, and 737 have died or gone missing while making the perilous journey to Europe, according to the International Organization for Migration.

The UN refugee agency said on Wednesday it feared around 500 migrants from Africa had drowned in the Mediterranean, in what could be one of the worst tragedies since the start of the migrant crisis.