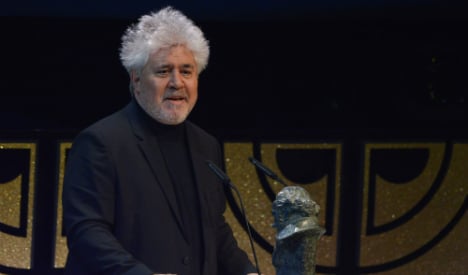 One of 20 movies selected to compete for the prestigious Palme d'Or award in Cannes next month, “Julieta” recounts a mother's excruciating 10-year wait for a daughter who abandoned her when she turned 18.

The film's release in Spain earlier this month had initially been clouded by the appearance of Almodóvar and his brother in the global Panama Papers scandal over an offshore company they briefly controlled in 1991.

The 66-year-old cancelled a press junket just days before the April 8th premiere due to scrutiny over the revelations, but the bad start soon wore away as “Julieta” climbed to fourth place in Spain's box office.

Inspired by “Runaway”, a book of short stories by Canada's Nobel laureate Alice Munro, the film is pure drama stripped of any hint of the laughs or idiosyncrasies that made films like “All About My Mother” or “Talk to Her” so popular.

“No one sings, there is no humour,” Almodovar told the El Mundo daily earlier this month.

“It's possible that I may go down the road of austerity from now on.”

How can we abandon loved ones?

A mix of romantic betrayal, bereavement, spiritual quest, escape and guilt, “Julieta” goes through three decades of the life of a Spanish woman and mother.

Julieta is played by two actresses – Adriana Ugarte portraying the sensual, wistful woman in her earlier years and Emma Suarez in the role of the older, tormented mother abandoned by her daughter.

Almodóvar told his actresses that they should read “The Year of Magical Thinking”, a book on mourning by US author Joan Didion, as well as French writer Emmanuel Carrere's heart-wrenching “Other Lives but Mine” for inspiration.

The film explores “the impenetrable mystery that makes us abandon the people we love, erasing them from our life as if they had never meant anything. And the pain that this desertion causes the victim,” according to
the official description.

But despite the darkness of the subject matter, the film still oozes colour – perhaps not as vivid as Almodóvar's past work but bright all the same.

It is full of female characters that include actress Rossy de Palma, an Almodóvar regular, as a dour housekeeper.

Fans have lauded a story constructed along the lines of a Greek tragedy, but some have criticised the film as lacking in subtlety.

Carlos Boyero, who writes for the El Pais daily and is a staunch Almodóvar critic, wrote of his indifference when he watched a film he felt did not “transmit anything emotionally or artistically.”

But on Tuesday, it was in fourth place in the Spanish box office, perhaps boosted by its Cannes nomination.

Almodóvar is a regular at the prestigious film festival.

“All About My Mother”, which recounts a mother's search for her dead son's transvestite father, was in the running for the Palme d'Or in 1999, as was mother-daughter film “Volver” in 2006, romantic thriller “Broken Embraces” in 2009 and “The Skin I Live In” in 2011, starring Antonio Banderas.

But while “All About My Mother” won the Oscar for best foreign language film, Almodovar has yet to be awarded Cannes' coveted golden palm.