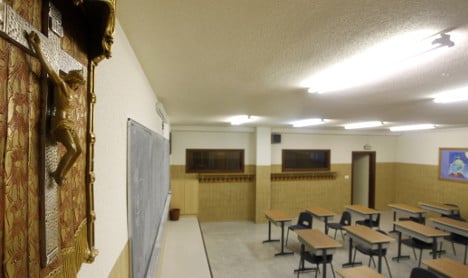 File photo of a classroom in Spain. Photo: Cesar Manso/AFP.

Catholic school teacher Roberto P. S. admitted before a Murcia judge on Tuesday that he did indeed molest eight girls and one boy, all seven years old at the time, a spokeswoman from the court confirmed to The Local.

But the religion teacher won’t have to go to jail unless he re-offends because of a reform to the criminal code.

Under an agreement reached between the prosecution and defense, because Roberto P. S. testified, he received a jail sentence of one year per child, or nine years total, according to broadcaster Cadena Ser.

But because he received individual sentences of one year, rather than one nine-year sentence, he qualified for a suspended sentence for each one, under a reform to the criminal code.

The reform made it so that individual sentences of less than two years may be suspended, or served outside a jail cell, as long as the person did not have prior convictions and does not re-offend.

In 2011, Roberto P. S. was arrested and taken into custody over accusations of child molestation, and a dozen more complaints from parents flooded in to authorities after the arrest.

According to local newspaper La Opinion de Murcia, the prosecution and defense had battled over how much prison time he should face.

But after he testified as guilty, he won’t have to go to trial to hash out a sentence, the Murcia court spokeswoman explained.

And the children, now 12, will be spared from having to relive their experiences in testimonies, according to La Razon.

Roberto must pay each victim €2,200 and is barred from working as a teacher during the time period of the sentence.

The result of the case caused outrage on social media, some calling it “shameful”

“This is outrageous!!” wrote the group SIMI, which advocates for tougher sentences for child abusers. “The Spanish justice system allows child molesters to walk free in the streets.”

“You fuck up someone's childhood and life, but it's OK because here you have to pay €2,200 and it's all fixed,” wrote a Twitter user.