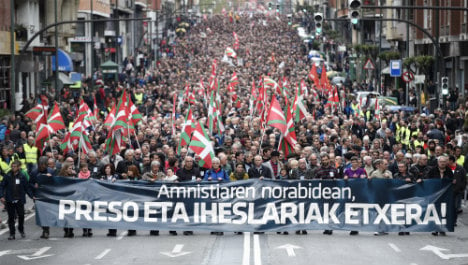 Former Eta prisoners for the first time led the march in the Basque region's most populous city. Past marches have been led by family members of the convicts, who are dispersed across dozens of prisons in Spain and neighbouring France.

The demonstrators, many of them waving red, white and green Basque flags, chanted “prisoners to their home” as they made their way through the streets under an overcast sky to city hall where letters from three Eta prisoners were read out.

Among those who took part in the march was veteran separatist leader Arnaldo Otegi, 57, who was released from jail in March after serving a six-and-a-half year sentence for trying to resurrect the outlawed Basque separatist party Batasuna.

Otegi, who is credited with helping end violence in the northern Spanish region, has said he aims to become the next leader of Spain's Basque Country which will hold regional elections at the end of the year. He declined to speak to reporters at the march.

The protest was called by a group of former Eta prisoners.

The group's last deadly attack in Spain was in August 2009.

The group wants negotiations on several issues, including the fate of around 400 Eta prisoners, before it fully decommissions its armed wing. Many Eta prisoners are kept in jails far away from the Basque region, making visits from family difficult.

In its most recent statement issued last month, Eta said “the consequences of the conflict have not been resolved, the main knot being the situation of Basque political prisoners which still has not been untangled.”

The Spanish and French governments have refused to negotiate with Eta.