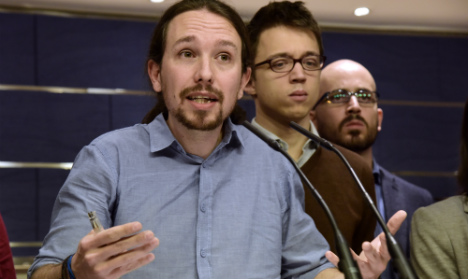 Fully 88.23 percent of the roughly 149,000 party members who took part in the April 14th-16th internal referendum opposed supporting such a government, the party said in a statement.

The vast majority, 91.79 percent, backed a “government of change” made up of the Socialists, Podemos and several small regional parties, the statement added.

The party plebiscite follows a December 20th general election that resulted in a hung parliament, with power divided among four main groupings, none of which has enough seats to govern alone.

The polls put an end to Spain's traditional two-party system as voters fed up with austerity, unemployment and corruption scandals decamped to new parties like Podemos and Ciudadanos.

But the parties have not been able to agree on the formation of a government. They have until May 2nd to agree on a power-sharing agreement, failing which fresh elections will be held on June 26th.

“The results are clear and the popular mandate will guide the next steps,” deputy Podemos leader Inigo Errejon tweeted.

Podemos leader Pablo Iglesias called the referendum in early April after three-way talks between his party and the Socialists and Ciudadanos broke down less than 24 hours after they began.

Analysts said the party leadership wanted an endorsement of its position to shield itself from criticism if Spain was forced to repeat the election in June, as looks increasingly likely.

“We did all that we can do,” the lead negotiator for the Socialists, Antonio Hernando, told reporters after the results of the vote were announced.

“The ball is in the court of other parties (…) What is certain is that 100 percent of Podemos voters do not want Mariano Rajoy to remain at the helm of the government,” he added.

Acting Prime Minister Mariano Rajoy's conservative Popular Party won the most votes in the election but lost its absolute majority in parliament.    He turned down a bid to form a government due to a lack of support from other parties.