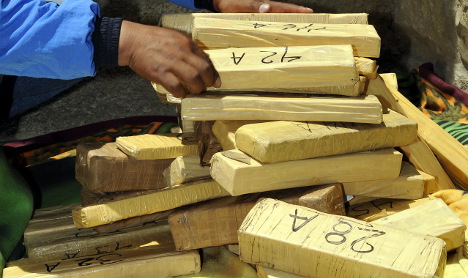 The paste, which is used as the basis for making cocaine, was found inside furniture that was shipped to the port of Barcelona and transferred to several nearby warehouses, officers said in a statement.

They gave no estimate for the street value of the drug, saying only that it would be enough paste to make about one tonne of cocaine.

The drugs ring is suspected of recruiting impoverished individuals who were sent to Peru where they lived for several months at the group's expense while pretending to work before returning to Spain.

“When the organisation planned the return of these people to Spain they would hide the drugs inside the furniture that was supposedly part of their home during their stay in Peru,” the police statement said.

“The person would return to Spain by plane and the furniture was shipped by sea in containers that were sent to different storage facilities in Barcelona from where they would be picked up by members of the criminal group,” it added.

Spanish police detained eight men and five women suspected of making up the smuggling ring as part of their investigation which was carried out with the help of the US Drug Enforcement Agency.

Among those arrested were people from Colombia, Cuba, Peru, Spain and Morocco, police said.

Spanish authorities seized over 22 tonnes of cocaine in 2015, a 43 percent increase on the previous year.