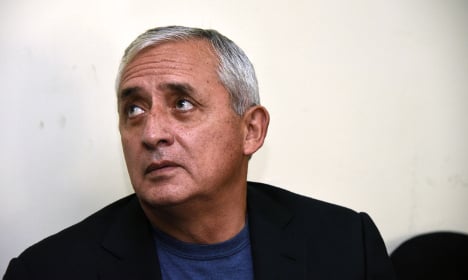 Perez, who took office in 2012 was forced out after mass protests last year. Photo: Johan Ordonez/AFP

Perez, who took office in 2012 but was forced out after mass protests last year, used his position as president “to facilitate negotiations where he would obtain direct financial benefit in detriment to the interest of the nation,” said prosecutor general Thelma Aldana on Friday.

According to the new allegations, the contract with the Spanish company was signed in April 2012 and included $30 million (€26.5m) in commissions for local and international negotiators.

Perez and Baldetti allegedly walked away with $4.2 million each.

This was “a criminal group with clearly defined roles” led by Perez and Baldetti, Aldana said.

Both Perez and Baldetti, scheduled to appear in court next week, deny the charges.