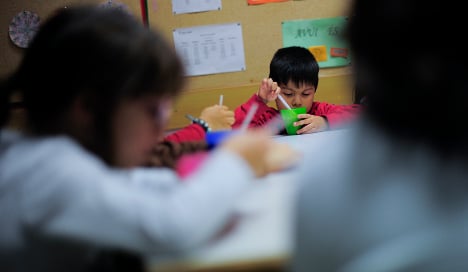 Children in a classroom in Barcelona. Photo: Josep Lago/AFP.

Spain was ranked the sixth worst developed country for childhood income inequality, according to a “report card” by Unicef released on Thursday.

More than one-third of Spanish children (36 percent) live at risk of poverty or social exclusion and inequality there has grown more in Spain than in most other developed countries, with the income gap exceeding 60 percent, according to the report.

Only Romania – at the very bottom – Bulgaria, Mexico, Greece and Israel were ranked worse than Spain.

“This measure of bottom-end inequality captures how far the poorest children are being allowed to fall behind the ‘average’ child in each country,” the report states.

Researchers analyzed 41 countries from the European Union and within the Organisation for Economic Co-operation and Development (OECD) for changes in inequality over time.

Denmark was at the top of the charts for the lowest levels of inequality in income, health, education and life satisfaction. Israel fell at the very bottom.

Spain in particular has been hit hard by the global economic crisis with one of the highest unemployment rates in Europe and this has trickled down to impacting the well-being of its youngest citizens.

“The financial and economic crisis of the recent years has impacted in particular boys and girls in developed countries,” the Unicef report on Spain states.

“The past few years have become a laboratory for the effects of inequality for the most vulnerable members of society.”

Since 2008, Spanish children's median income fell, but the poorest 10 percent saw an even sharper drop, “leaving the poorest children increasingly lagging behind,” according to Unicef.

But despite Spain's youth facing steeper challenges when it comes to battling financial struggles, the country has been able to improve conditions for health and nutrition for all children.

In fact, Only Spain and the United States showed improvement in all health indicators since 2002.

Still, in the category of life satisfaction Spanish children fell in the bottom third, meaning there was a sizeable gap between how happy kids reported feeling.

Unicef called on the Spanish government to make a pact to fight against childhood poverty.

“The Report Card provides a clear reminder that the well-being of children in any country is not an inevitable outcome of individual circumstances or of the level of economic development but is shaped by policy choices,” said Dr. Sarah Cook, director of the Unicef Office of Research, Innocenti, in a statement.

“As our understanding of the long term impact of inequality grows, it becomes increasingly clear that governments must place priority on enhancing the well-being of all children today, and give them the opportunity to achieve their potential.”