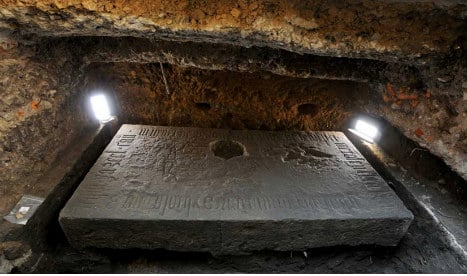 The tomb was found where the city's first cathedral once stood and it appears to have been built over an Aztec structure, according to the National Institute of Anthropology and History.

The Spaniards erected buildings and the cathedral, which later disappeared and was replaced by another one, at the heart of the Aztec civilization, Tenochtitlan.

The six-foot (1.9-meter) long slab, dating from the first half of the 16th century, covers the tomb of a priest named Miguel de Palomares, a member of the cathedral's first ecclesiastical council, who died in 1542, the institute said.

The priest's remains could shed light on how people lived in the decades following the conquest, the statement added.

The stone was found four feet below street level with the priest's name on it along with three fleurs-de-lis, flowers symbolizing the Dominican order.

The stone includes texts in Greek and old Spanish.

The institute believes the tomb still holds the priest's remains and that its discovery could shed light on his era's burial rituals as well as the diets of Spanish conquistadores.

The engineers found the stone in recent days after digging eight inches deeper than planned when placing one of eight lampposts that will illuminate the current cathedral.

The stone is fractured after it was accidentaly struck by either a post or a large cross a couple centuries after the tomb was installed.