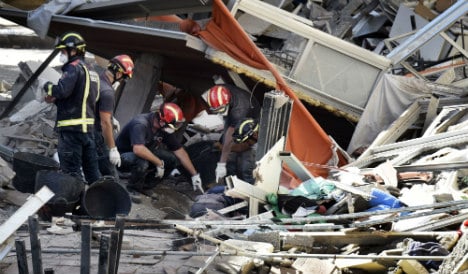 Photo: AFP
No further people were missing, according to the mayor's office in the southern town of Arona, after Thursday's collapse in the tourist area of Los Cristianos, near one of Tenerife's most popular beaches.

The victims were four women and three men who had yet to be formally identified, it said in a statement. No nationalities were given for the victims. The building is located in Los Cristianos, popular with tourists. Photo: AFP

The building, located in the beach area of Los Cristianos in the south of Tenerife, collapsed at around 9:30am (0830 GMT) on Thursday. The cause was not immediately clear.

Four buildings located next to the collapsed block have been evacuated and dozens of families are living with relatives or staying in temporary accommodation.

Tenerife, the largest of Spain's Canary Islands off the northwest coast of Africa, is a popular destination for British holidaymakers and retirees. It is also popular with German tourists.