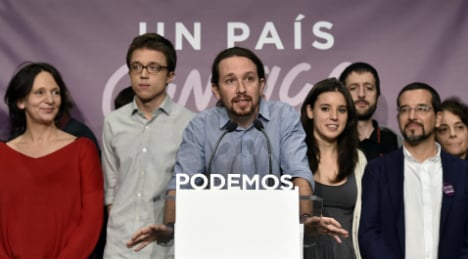 Political parties that won seats in parliament in an inconclusive December general election have until May 2nd to agree on a power-sharing agreement or else fresh polls will be held on June 26th.

Podemos leader Pablo Iglesias announced the three-day party referendum last week after three-way talks between his party and the Socialists and Ciudadanos broke down less than 24 hours after they began.

He called the talks “a disappointment”, saying all of his side's policy demands were denied.

The referendum will ask party members if they back a government based on a pact agreed between the Socialists and Ciudadanos in February or support a purely leftist “government of change” made up of the Socialists, Podemos and several small regional parties.

Podemos leaders have made it clear they oppose a Socialist-Ciudadanos coalition government, deeming the measures agreed in their pact too economically liberal.

Just under 394,000 Podemos members are eligible to vote in the referendum either online or at polling stations set up across the country.

The referendum runs until Saturday. The results will be announced on Monday.

Analysts said the Podemos leadership wants an endorsement of its position to shield itself from criticism if Spain is forced to repeat elections in June as looks increasingly likely.

Podemos senator Ramon Espinar told an open air party meeting in Madrid on Wednesday night his side “could not accept” a Socialist-Ciudadanos government that would largely follow the economic policies put in place by Spain's ruling conservative Popular Party (PP), in power since 2011, saying they have led to greater economic inequality.

The Socialist-Ciudadanos pact called for a rise in the monthly minimum wage of just one percent, he added.

José Torres, a 72-year-old architect and Podemos member who attended the meeting in a central Madrid square, said if Podemos backed a Socialist-Ciudadanos government “it would lose all its credibility”.

The December 20th polls put an end to the traditional two-party system as voters fed up with austerity, unemployment and corruption scandals flocked to new parties, leaving a hung parliament divided among four main groupings, none of them with enough seats to govern alone.