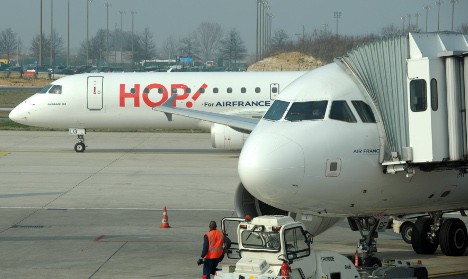 Photo: AFP
The drama reportedly took place on the tarmac of Charles de Gaulle airport on a flight that was bound for Bilbao in northern Spain, and operated by Air France subsidiary Hop!.
It's understood that passengers became scared after learning that a man “of Arab origin” hadn't boarded the plane, despite checking in, reported Spanish daily El Correo.
He was believed to have been travelling with another woman, who had already boarded the plane along with the 100 or so other passengers.
Passengers soon learned that there was also a suitcase on the plane that apparently belonged to no-one on board.
To make matters more confusing for the passengers, the female companion of the missing man did not speak French or Spanish, according to reports.
According to El Correo's sources at Air France, the woman was interrogated but “did not speak”.
Panic soon spread across the plane as the security ordeal continued.
“It was horrible,” a passenger from Bilbao who was involved in the incident told El Correo.
“It’s true that there were people who called home to say something very serious was happening and they didn’t know what was going to happen.”
The son of a woman on the flight told Radio Bilbao that his mother called her “as if to say goodbye”.
“My mother told me people were crying, calling their families to tell them they didn't know what was happening…”
“She was speaking to me in a voice… like she was saying goodbye.”
Passengers were kept on board the plane for three hours while authorities investigated, before they were eventually taken off the plane.
The man confirmed that her mother and the other passengers had been sent to a nearby hotel to spend the night, and took a flight out to Spain the following day.
While Air France remained tight-lipped about the reasons for the three-hour delay, the company told The Local that “following procedures, safety checks (were) requested, adding that these procedures took “longer than expected”.
The company has not confirmed details of what happened on board.
There have been an increased number of incidents of this nature since the November terror attacks in Paris, and the March attacks in Brussels.
Most recently at Charles de Gaulle, a security scare saw a British man ordered off an easyJet flight in March after he was found to have boarded with a knife.