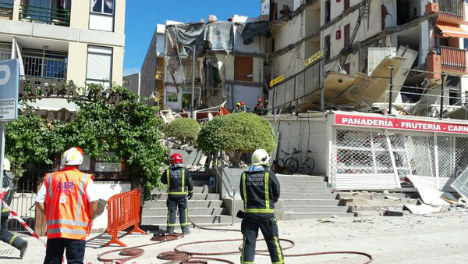 Three other people were injured, one of them seriously, during the collapse, which may have been caused by a gas leak.

A five-storey block of flats collapsed in a tourist hotspot on the Spanish Canary Island of Tenerife on Thursday morning.

The block of residential flats is located in the town of Los Cristianos, a popular holiday spot on the island.

Three people were injured in the collapse, one seriously, and rescuers used sniffer dogs to attempt to find nine people thought to be buried within the tubble.

At 4pm local time, emergency services reported that they had located and rescued four people from within the rubble and were still searching for five others who were unaccounted for.

A video of the scene just after the building collapsed can be viewed below:

A neighbour told Spanish news agency Efe that before the collapse she heard an explosion and smelled gas.

Emergency services have not yet confirmed whether there is anyone still inside the collapsed building.

A 57-year-old woman has been injured “seriously” according to emergency services, while a 28-year-old woman sustained light injuries and was taken to hospital.

A third woman, 55, was treated at the scene for shock, El País confirmed.

The apartment building was located near a Swedish school and church and its collapse was witnessed by Swedish residents on the island popular with northern European expats and holidaymakers.

Sarah Pallin, a Swedish journalist who lives just a few blocks from the collapsed building told Swedish tabloid Aftonbladet that a huge search operation had been going on.

“There were several ambulances and rescue vehicles (…) now they are looking for people in the rubble with search dogs,” she said.