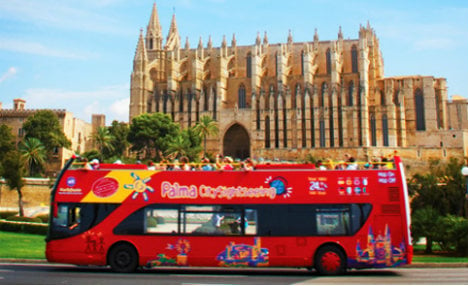 “Stop Guiris” and “Tourism is destroying our city” are two of the others in a recent spate of graffiti that is angering visitors and local residents alike.

The anti-tourism phrases suggest a growing malaise at the number of holidaymakers crowding into the Balearic capital as residents complain that tourism is destroying local neighbourhoods.

Residents of La Seu, the historic old quarter of narrow cobbled streets around the city's Gothic cathedral, bemoan the fact that on top of having to suffer inundations of tourists, they now also have their neighbourhood blighted by graffiti.

“Not only have we do deal with the burden of tourist saturation which is bringing the neighbourhood to near collapse, but we are now held to be responsible for removing the anti-tourist slogans from our walls,” said a written complaint from the residents association to City Hall.

“The council has ignored the problem, claiming that residents should be responsible for cleaning and repainting walls. They will only deal with graffiti if it is on council property,” it continued.

Residents are also furious about a new trend by tourists to daub or scratch love hearts on the medieval walls of Calle Palau to symbolize their love.

“People who live here have even heard tour guides encouraging holidaymakers by telling them this is a street of love. By doing so they are turning an act of vandalism into a tourist attraction,” a spokesman from the residents’ association told  Europa Press.

Earlier this year neighbours demanded that something be done to limit tourism. “This quarter is turning into a theme park for the exclusive use and enjoyment of tourists,” the group said.

Mallorca authorities have been battling to clean up the image of the island and appeal more to big spenders and family groups than the badly behaved cheap tourists attracted to resorts like Magaluf.

Last year they brought in a raft of by laws that saw a ban on drinking in the street, late licensing and happy hours and even brought in British police officers to patrol the streets.

Mallorca isn’t the first place in Spain to express malaise at the booming tourism industry. Barcelona residents have been fighting back to reclaim the character of traditional neighbourhoods overcrowded by tourists.

City authorities have set a limit on the building of new tourist accommodation and are attempting to curb the rental of private homes through services such as Airbnb.