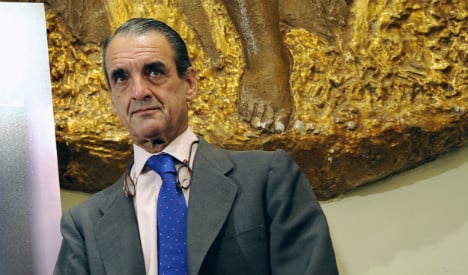 Mario Conde, who served less than half of a 20 year jail sentence for embezzlement and fraud, was among eight people arrested on Monday including his son, daughter and her husband.

The arrests were made in an investigation into whether Conde fraudulently repatriated funds hidden offshore while he was head of Banesto, which had to be taken over in 1993 after an audit revealed a shortfall of billions of euros.

According to judicial sources cited in El Mundo, funds had been repatriated to Spain from Switzerland, Luxembourg and the UK in incremental amounts of no more than €3,000 a time since 1999 using a network of companies including a cosmetics firm and an aloe vera producer.

Investigators believe that a large part of the money allegedly embezzeled during Conde’s chairmanship of Benesto has never been traced.

Conde ran for Prime Minister in 2000 after serving his first jail sentence for fraud, but he was back behind bars by the end of the year and wasn’t released again until 2008 when he again stood for political office, without success.

He published two books charting his rise and fall, “Days of Glory” followed by “Memories of a prisoner”.

Dubbed “The Shark” and “Spain's Great Gatsby”, Conde could now face another 12 years in jail. He is due to appear before an investigating judge later this week.