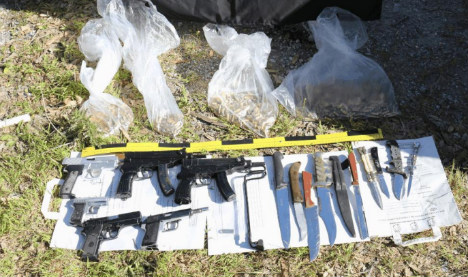 The weapons were buried in a cardboard box. Photo: Interior Ministry

Spanish police discovered the arsenal buried on a plot of waste land and a pen drive confirms links to Isis, which had pinpointed several target locations in the region. The weapons were buried in a cardboard box. Photo: Interior Ministry

Police revealed on Tuesday that analysis of a pen drive found at the scene confirmed the weapons were linked to Isis.

The pen drive was wiped clean but police managed to restore some material, which dated back to 2014, and found “six targets set out in Ceuta, all outdoor spaces where crowds gather”, according to local newspaper El Faro Digital. The weapons were discovered with an Isis flag. Photo: Interior Ministry

The weapons were still in a “perfect state of preservation” according to the ministry's statement.

The Civil Guard confirmed that an investigation into the origin of the weapons had been launched.