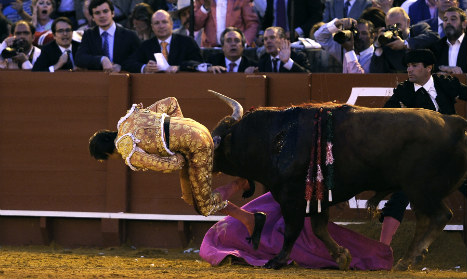 Dramatic footage showed the moment Andres Roca Rey, a 19-year-old matador from Peru appeared to be gored in the buttocks. He was lifted on the horns of the sixth bull of the evening in La Maestranza bullring in Seville while fellow matadors ran into the ring to distract the animal.

Watch a video of the goring here:

Roca Rey stumbled to the ground with blood smeared across his rear and then miraculously walked from the ring.

Medics at the bullring reported that the matador had merely sustained a graze to the thigh and that the blood soaking his skin tight sparkly embroided gold leggings was in fact the bull's.

The bullfight, which took place at the start of Seville’s famous April fair was watched by a crowd of thousands, including the former monarch, King Juan Carlos.