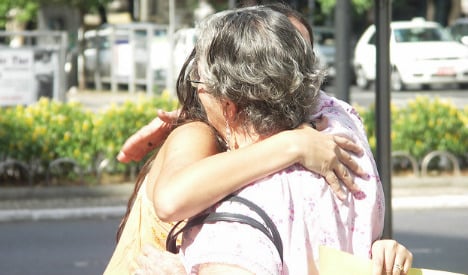 Two women and a man have been arrested in Barcelona after using hugs as a front in order to rob old people.

The trio – aged between 19 and 34 and from Madrid – were arrested hours after stealing a gold chain from a woman, whom they had asked for directions in the town of El Masnou, near Barcelona.

They pulled up alongside the elderly woman in their car and asked her how to get to get to an outpatient clinic because they had a medical emergency.

After she had given them directions, one of the women got out of the car and hugged the old lady tightly, thanking her for her help.

To express her gratitude, the woman insisted on giving the old woman a necklace, which she fastened around her neck and while doing so, stole the gold chain the woman was wearing using some pliers.

The woman had no idea what was going on until it was too late.

She reported the robbery to the Mossos d’Esquadra – the Catalan police – who managed to track down the three culprits, who were in the middle of another scam when police caught up with them.

Police discovered bags of cheap necklaces and chains in the car, which the trio used in their muggings.

Hugger muggers are a well-known phenomenon in the United Kingdom, where Manchester police recently warned people to look out for the scammers, who typically hug or dance with their victims in order to steal their wallets.