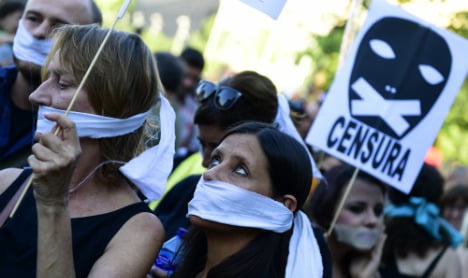 A protest against the so-called Gag Law. Photo: AFP

Axier Lopez posted photographs taken when police went to arrest a Basque activist who had failed to appear in court.

He posted the photographs, which do not even show the faces of the police officers, on Twitter on March 3rd.

But the Spanish government was swift to respond labelling his tweet a contravention of the 2015 Ley Mordaza and imposing a fine of €601 ($680) for publishing photos of police without permission.

“The defendant published images of the police raid in Eibar in his Twitter account @axierL without any permission. The police officers that took part in the operation can be identified by those images, with the risk this poses to them”, according to the complaint filed by Spain’s Interior Ministry.

The Basque magazine Argia, which employs Lopez, decided on Friday that it would refuse to pay the fine calling it “unjust and against the right to press freedom”.

The law, brought into force last July by the conservative Popular Party, is fiercely opposed and has raised fears that it would used to curb the freedom of the press as well as the right to peaceful protest.

Journalist groups have taken a case to the European Court of Human Rights demanding that the “gag law” be repealed and international human rights organizations have criticized it.

Several people have already fallen foul of the law including a man who posted a comment on Facebook calling the police “a bunch of slackers” and a woman who posted a photograph of a police car illegally parked in a disabled bay.