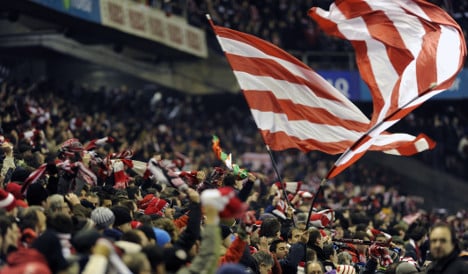 The Basque Country Parliament on Thursday passed a law that will ban the consumption of tobacco and alcohol in arenas for sports or bullfighting events.

The law states that the “sale or supply” of alcoholic beverages will be prohibited in facilities “where people perform sports competitions, as well as health clinics, public health clinics or social services”.

It also bans smoking “in all enclosed and semi-enclosed public spaces, places accessible to the general public or places for collective use, regardless of whether they are public or private”.

The Addictions Law also limits e-cigarettes, making it the first autonomous community to ban the use of such electronic devices in bars, restaurants and other enclosed spaces, according to broadcaster RTVE.

The law was pushed by Basque Health Minister Jon Darpón, who on Thursday called it a “comprehensive, advanced and modern” initiative on Twitter.

The new rules are “intended to respond in an effective manner to the needs and expectations of our society, for now and for the future, on the topic of addiction,” said Darpón, in a statement.

“It ties together the intense work by Basque institutions for over 30 years to tackle a phenomenon so complex and ever-changing.”

The limits on smoking do have an exception: In the case of privately owned places for public use, smoking may be permitted if the majority of the people there agree to it – but this is only applicable to non-profit entities.

The law also opens the door for legal cannabis clubs to be regulated, according to Spanish media, by setting up certain rules for adult users, but leaves many details still to be determined.

Certain cannabis clubs are already allowed in Spain for small, private groups, giving rise to more than 100 such clubs in the Basque Country alone.

Violations of the new law can results in fines of between €600 and €600,000, according to Spanish media, as well as temporary or total closure of a location.