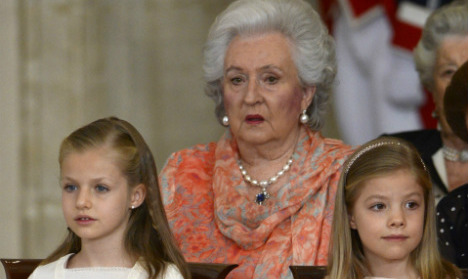 Pilar de Borbon with the young princesses at the abdication, June 2014. Photo: AFP

Pilar de Borbon, the elder sister of former monarch King Juan Carlos, said in a statement sent to the Europa Press news agency that the company never had revenues “outside the control of tax authorities” and that it never failed to comply with “any obligation of Spanish tax law.”

The relevation that she had an offshore company comes as King Felipe tries to clean up the monarchy's image since he took the throne in 2014 after his father abdicated, due in part to corruption scandals that hit the royals.

Princess Cristina, Felipe's sister, is currently on trial accused of being an accessory to tax evasion in a case linked to her husband's dealings when he ran a foundation.

The Panama Papers scandal erupted Sunday when media groups made public an investigation into a trove of 11.5 million documents leaked from Mossack Fonseca, a law firm, on offshore accounts held by prominent individuals.

While offshore holdings can be legal, they can also be used to hide wealth.

Among those involved are friends of Russian President Vladimir Putin, the brother-in-law of Chinese leader Xi Jinping, Argentine football star Lionel Messi and Iceland's Prime Minister Sigmundur David Gunnlaugsson who has since resigned.

According to Spanish online daily El Confidencial, which had access to the leaked documents from Panama-based Mossack Fonseca, Pilar de Borbon “for years presided and headed a company based in Panama”.

The 79-year-old became president of the firm, Delantera Financiera SA, in 1974, a year before her brother Juan Carlos acceded the throne, the newspaper said.

She left the presidency of the firm in 1993 but remained linked to the company, which was dissolved on June 24, 2014, five days after her nephew Felipe was proclaimed king.

Pilar de Borbon said the fact that she was listed as the head of the company, along with her late husband and later one of her sons “reveals that there never existed a desire on our part to hide its existence or our participation in it”.

She said her family gained control of the company in 1974 when her husband Luis Gomez-Acebo, a financial advisor, decided to expand his professional activities outside of Spain.

But after her husband developed cancer in 1984 the company did not develop any new projects, she added. Gomez-Acebo died in 1991.

Pilar de Borbon said the company was dissolved in June 2014 because it did not have enough resources to justify its upkeep.