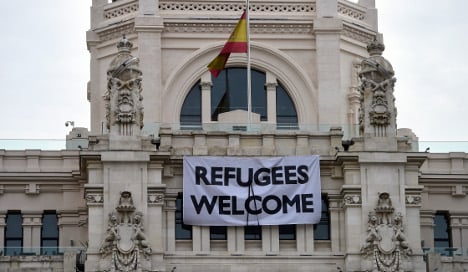 Spain agreed to take in roughly 15,000 refugees from overwhelmed Greece and Italy under an EU redistribution plan, but over the last six months, the country has fulfilled just 0.1 percent of this promise – bringing in 18 people, according to Spanish NGOs.

The first 18 refugees under the EU agreement from September arrived in Spain at the end of last year. But even when the first group of a dozen stepped foot onto Spanish soil in November, NGOs questioned then why it had taken so long and why there were so few.

Since December, there have been no further groups coming to Spain under the redistribution plan, according to El Pais.

Big cities like Barcelona and Madrid planned a network across the country for citizens to register to have refugees stay in their homes in anticipation of the thousands who would arrive.

But instead, Barcelona has been disappointed and “filled with rage” by the low number of arrivals, the city’s left-wing mayor Ada Colau said earlier this year.

Spanish politicians have blamed the slow movement on the “complexity” of coordination and acting Prime Minister Mariano Rajoy said last weekend that the EU plan was not going “as fast as [he’d] like”.

“There are things that could be done better. Things are moving slowly,” he said, according to El Pais.

Rajoy was confronted by opponents about his “passivity” on the issue on Wednesday in Congress, with Ciudadanos leader Albert Rivera saying that “it is not worth having quotas if you do not carry them through.”

NGO Save the Children Spain also shipped to the acting Prime Minister a pair of shoes from a five-year-old Syrian refugee girl who is among the thousands waiting in camps in Idomeni, Greece, hoping the border with Macedonia will open.

The NGO said the girl, Hala, is not able to “take another step further” with the shoes, but Rajoy can.

Posted by Save the Children on Wednesday, April 6, 2016

The Interior Ministry announced last month that a second group of 450 refugees would be brought to the country, but this has not yet happened.

The government also reportedly informed both the UN commissioner for refugees as well as the European Commission that it was willing to take in more people from Greece and Italy.

But when asked why these groups had not yet arrived in Spain, the interior ministry said that there were “procedural implications” under the EU quota plan that have delayed their arrival, including “the need to provide information about the country of relocation to the potential beneficiaries, security-related issues, and issues that are not completely resolved”.

Spain received a total 14,600 first time asylum applicants in 2015, according to Eurostat, but has continued to face pressure from its own citizenship to take in more asylum seekers and criticism for its initial reluctance to adopt the EU quota agreement.

NGOs and Barcelona blame Spanish as well as European leaders for dragging their feet on the matter.

“Here there is not a problem of lack of money or infrastructure, but a lack of political will,” explained Estrella Galán, secretary general of the Spanish Commission for Helping Refugees (CEAR), referring to the more than €200 million budgeted for refugee care.

The Red Cross of Spain said that in contrast, the EU has been quick to send back immigrants in Greece to Turkey under a controversial agreement where European countries take in one recognized Syrian refugee from Turkey for every Syrian Turkey takes back from having gone illegally to Europe.

“The government says that there’s a problem with red tape at the European level, especially with the identification of refugees in Greece,” said Cristina Domínguez of the Spanish Red Cross to El Pais.

“They cast blame on one another. But I suppose that the refugees who are now being deported to Turkey also will have to register and this is being done much more quickly.”