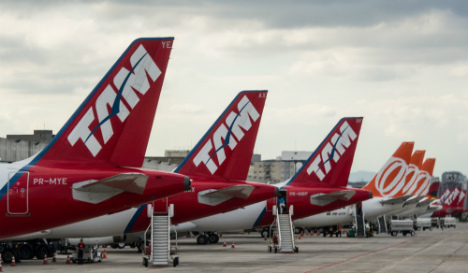 The TAM flight was forced to return to Madrid. Photo: AFP

Spanish airport operator AENA on December 14th ordered a Brazilian TAM airlines plane with 315 passengers and 16 crew members on board back to Madrid 90 minutes into its flight to Sao Paulo, after getting a call from a man claiming a bomb was on board, police said in a statement.

The man, who spoke Spanish with an Arabic accent, mentioned the flight and then could be heard saying “Today people will die” and “Allahu Akbar”, an Islamic phrase meaning “God is Great”, the statement added.

The passengers were evacuated from the plane and police searched the aircraft, finding no bomb.

A police probe determined that the call was made from a public pay phone in a town in Cuenca in central Spain and officers detained two men and a woman who they believe are responsible for the call.

The three had ties to a Brazilian woman on board the plane who had been denied entry into Spain due to a Swiss court order, the police statement said without giving further details.

The three suspects have been charged with causing public disorder and may also be held liable for the economic damage caused by the false alarm which police said was initially estimated to be over €200,000 ($225,000).

The plane was escorted back to Madrid airport by a Spanish air force fighter jet and the airport's runways were closed for an hour while police inspected the aircraft.