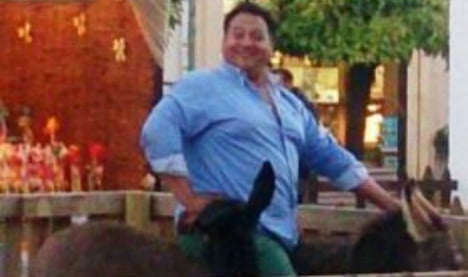 The 150kg man crushed the donkey by sitting on it. Photo: El Refugio del Burrito

A judge has thrown out a case against an overweight Spaniard who killed a donkey by sitting on it, in a “prank” that went wrong.

The man was arrested in December 2014 after he jumped the fence of a live nativity scene and leapt onto the back of a donkey, which was only four months old, named Platero.

The man, 38, who weighed almost 150kg (24 stone) shared the photo on Whatsapp, and it eventually went viral on social media in Spain, with many Spaniards horrified at the man’s behaviour.

The incident occurred in the town of Lucena, near Córdoba in southern Spain and was widely condemned by animal rights organizations.

Animal rights group Peta said there was “no excuse for the pain that this donkey endured from his internal injuries or for his horrible death”.

Organizers of the living nativity scene “now have the blood of this poor donkey on their hands”, Peta said in a statement.

The case finally came to court this week when the judge in Malaga ruled that the incident “did not constitute a crime”.

“We do not credit any aggressive action on the part of the accused, or neglect on behalf of the town hall, which is worthy of criminal sanctions,” the judge said, but added that this did not, however, “close the door to possible administrative or civil penalties.”

The donkey sanctuary which brought the original complaint, El Refugio del Burrito, has said it will appeal the decision.