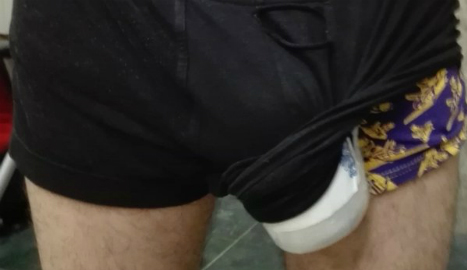 The man attempted to hide the bundle in his underwear. Photo: Policia Nacional

The 43-year-old´s man´s unusually large bulge was actually a tightly wrapped bundle of 400g of cocaine, discovered during a routine frisking at security.

Security officers discovered the cylindrical bundle in the underwear of the man, who was attempting to smuggle the drugs into Spain from Costa Rica.

Spain’s National Police tweeted a photograph of the man standing in his underwear, hands on hips, the white package protruding from his underwear.

The man was arrested on charges of crimes against public health and faces a prison sentence of between six months and three years.