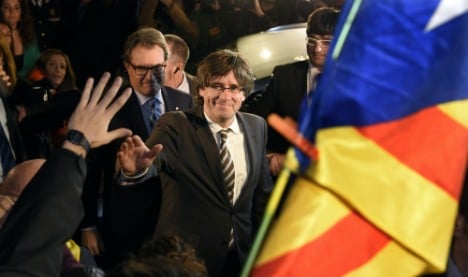 Carles Puigdemont (centre) will not declare the region's independence during his mandate. Photo: AFP

Carles Puigdemont was elected president of Catalonia's semi-autonomous government in January with the task of fast-tracking the Spanish region towards independence from Madrid within around 18 months.

But asked whether he would actually be declaring independence within that timeframe, Puigdemont told Spain's economic daily Expansion that he would not.

“Because it's not planned and it's not our commitment,” he said in an interview on Monday.

But “we will do all the work necessary for this country to become an independent state,” he added.

Catalonia's predominantly pro-independence parliament is currently working to put in place administrative organs such as a regional treasury and social security system in view of creating a separate state.

But until Puigdemont's comments, it had always been unclear whether they would actually declare independence at the end of the 18-month timeframe.

According to sources within Catalonia's executive, who refused to be named, the regional government plans to call new parliamentary elections when the 18 months are up.

The newly-voted regional parliament – which they hope will be composed of a majority of pro-independence lawmakers like it is now – will then be tasked with writing a constitution for a new Catalan state.

A referendum will be called, and if the region's 7.5 million inhabitants approve the constitution, Catalonia will officially declare independence from Madrid.

However the Spanish government is likely to challenge these planned steps in court.

For the moment, Spain is locked in political deadlock as parties struggle to form a coalition government following inconclusive December elections.

But all the main parties involved in negotiations for a future government oppose independence in Catalonia, although far-left Podemos supports holding a Scotland-style referendum on the issue.

Catalonia already enjoys a large degree of freedom in education, health and policing.

But after years of fruitless calls for greater autonomy on the taxation front – Catalonia complains it pays more to Madrid than it gets back – the region lurched towards separatism.

It tried to hold a referendum on independence in 2014 but the vote ended up being purely symbolic as Spain's then conservative government declared it illegal.

In the interview, Puigdemont called on the future Spanish government to allow a referendum to settle the matter once and for all.