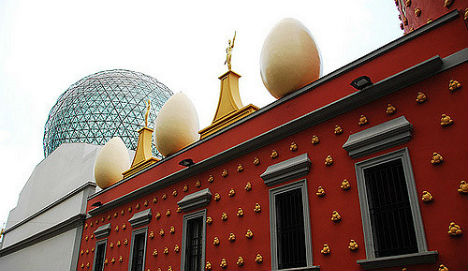 Figueres near Barcelona is famous as the hometown of surrealist artist Salvador Dali and the site of the Dali museum. Photo: footprints.mika/Flickr
The Frenchmen, aged between 19 and 22, were travelling at high speed in a Volkswagen Golf when they crashed into a car taking workers to a restaurant, said Jordi Jane, director of the Catalan interior department, at a press conference shown on local television.
The two male workers killed in the accident were a Moroccan and a Colombian and were on their way to a restaurant in Perthus in the French Pyrenees. The Spanish driver of their car was hospitalised.
On March 20, 13 foreign-exchange students were killed when the driver of their bus crashed into an oncoming car in southern Catalonia as they returned from a festival in the province of Valencia.
The accidents are among the deadliest in Spain in recent years. In November 2014, a bus carrying pilgrims fell into a ravine in the southeast of the country, leaving 14 dead and another 41 injured.