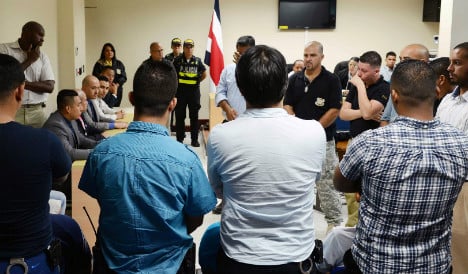 The four men were sentenced to decades in prison. Photo: AFP

A Costa Rican court on Tuesday sentenced four men to decades in prison for the 2013 murder of an environmentalist, tying up four Western women who were with him, and separately raping a Costa
Rican woman.

The judgment capped a nine-week retrial of seven men accused of the killing of Jairo Mora, a 26-year-old Costa Rican working to protect sea turtle nests on the country's Caribbean coast.

It handed down terms of 74 to 90 years for each of the four convicted men, but under Costa Rican law the lengthy sentences automatically revert to a maximum of 50 years each.

The three other men accused in the trial were acquitted.

The attack on Mora and the female volunteers with him – three Americans and a Spaniard – occurred on Moin Beach, just to the north of Limon, on May 31st, 2013.

The savagery of the crime dealt a severe blow to the Central American country's image as a safe, eco-tourist-friendly destination.

Prosecutors said the convicted men were part of a turtle-egg poaching gang who grabbed Mora. They beat him unconscious, tied him to a pick-up truck and dragged him along the beach until he suffocated in the sand.

They were also sentenced for attacking a local Costa Rican family in the area around the same time, raping a woman and robbing them.

They were acquitted on a charge of raping one of the Western women for lack of evidence, but were convicted and sentenced for holding the women for hours and robbing them.

The retrial was ordered by an appeals court after the seven suspects were acquitted in a trial early last year because of police errors in handling the investigation.