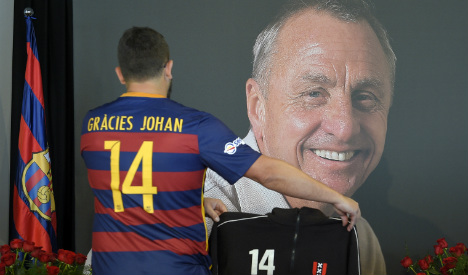 The most watched game in world football is Barça's first since Cruyff passed away at the age of 68 after a short battle with cancer last week.

A pre-match display involving over 90,000 fans will read “thank you Johan” with the same message carried on the Barça players' shirts.

“In what is a special match, it is without doubt extra motivation for us to try and win the game,” said Barça captain Andres Iniesta.

Indeed, the emotion surrounding the occasion supersedes its importance in the title race in La Liga with Barça 10 points clear of third-placed Madrid with just eight games remaining.

A 4-0 thrashing of Real when the sides last met in November put Barça well on course to retain the title.

However, with Madrid now under new management since Zinedine Zidane replaced Rafael Benitez in January and with the front three of Cristiano Ronaldo, Gareth Bale and Karim Benzema fit and in scoring form, Iniesta expects a much tougher task on Saturday.

“These games are different, it doesn't matter how the teams are playing before because we all like to beat your biggest rivals,” added the Spanish international.

“We expect a difficult, close game which will be decided by small details. We have all the respect in the world for the team we will face because they deserve it.”

Bale in particular will be well-rested as he was given time off by Wales boss Chris Coleman during the two-week international break preceding the game.

And he is confident that Madrid could drag themselves back into the title race if they can snap Barça's 39-game unbeaten run stretching back to October.

“They are playing very well at the moment so we have to take the game to them,” said Bale.

“We have to attack them, we have to exploit their weaknesses, we have a game plan and if we perform to our maximum I'm very confident we can get the win.

“I believe anything is possible in football. We know we are 10 points behind but we will keep fighting until the league is impossible.

“At the moment it's very possible. If we win on Saturday we are seven points behind and you never know what happens.”

Both coaches should be able to name their strongest starting line-ups with Barça only missing Jeremy Mathieu and Sandro Ramirez, while Madrid have a clean bill of health.

However, tiredness could play an important factor with two of Barça's deadly front three, Lionel Messi and Luis Suarez, only having arrived back in the Catalan capital on Thursday after playing World Cup qualifiers for Argentina and Uruguay respectively in the past week.

Five-time World Player of the Year Messi could also register his 500th career goal having taken his tally to 499 with his 50th goal for Argentina in a 2-0 win over Bolivia on Tuesday.

“It would be nice to score my 500th goal against Real Madrid in the Clásico, but it would be even nicer to win the game,” said Messi.

Atletico Madrid can close to within six points of Barcelona at the top before kick-off at the Camp Nou as they host Real Betis earlier on Saturday.

However, Atletico coach Diego Simeone could keep a number of players in reserve as they travel to face Barça in the first leg of their Champions League quarter-final on Tuesday.

Meanwhile, Valencia visit Las Palmas hoping to distance themselves from the relegation zone with Pako Ayestaran in charge for the first time following Gary Neville's sacking on Wednesday.