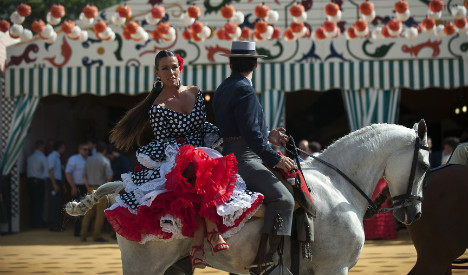 The Burial of the Sardine, Murcia, April 1st – 3rd Costumes, floats, fireworks; this is one of the big festivals of Murcia and the grand finale of spring parties when a pagan celebration takes place the weekend after Easter. Translated literally as the Burial of the Sardine it starts with a speech from “Doña Sardina” sartirising well-known politicians in what is meant to represent the last will and testament of the sardine. After parades, street musicians, and a lot of fun and dancing, the 'sardine' is ceremonially burnt.

Held in the ancient Roman theatre at the archaeological site of Itálica, the event brings together amateur university drama groups from around Europe to promote the study of classics. One of the most beloved fiestas in Seville happens around two weeks after Easter week every year, when people don traditional dress, dance Sevillanas and eat, drink and are merry. Families have their own casetas, or marquees, but if you don't know anyone with access to an exclusive caseta, have no fear – the partying and dancing spills out onto the streets of Seville, meaning everyone can join in the fun, that often lasts well into the early hours.

In April, the town of Alcoy in Alicante travels back to the Middle Ages to celebrate a battle that pitted Moors against Christians. At the time Alcoy was on the border that separated Spain’s Christian and Islamic held territories and one day in 1276 the Moors launched an attack on the town. Legend has it that Saint George swooped down during the battle and secured victory for the Christians. To give thanks for his help during the battle, the residents of Alcoy made Saint George their patron saint and have held a festival in his honour ever since.

For nine days at the end of April the city of Malaga is transformed into the Costa del Sol’s answer to Cannes in a celebration of Spanish film. Feature films, shorts and documentaries are all showcased here.

A festival that brings together 30 countries to celebrate their cultural and culinary wares within dozens of marquees set up at Fuengirola’s showground. Events organized for children, gastronomes and armchair travellers it is the perfect setting to tour round the world in just a few hours. Spain is gearing up to celebrate its most famous son in April. Miguel de Cervantes, who penned the literary classic Don Quixote, died 400 years ago on April 23rd and towns and cities across Spain are holding various events in his honour.

The Local has compiled a list of the best ways to celebrate 400 years of Cervantes. Barcelona won their last clash against Real Madrid. Who will win this month? Photo: AFP

Two of the world’s best teams and arch-rivals go head to head at Barcelona’s Camp Nou stadium in April in what is bound to be a thrilling match.

Fancy some music with your marathon? There will be concerts along the route of Madrid’s rock n roll marathon, entertaining runners as they pound the pavements of Spain’s capital. If running isn’t quite your thing, join the thousands of spectators cheering along the route, which passes some of Madrid’s most iconic landmarks, such as the Royal Palace and the Puerta del Sol square.