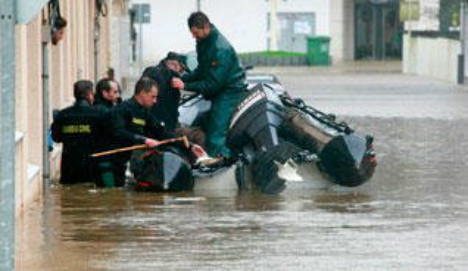 While much of central and southern Spain was enjoying the first of spring’s sunshine, the north of the country was being battered by intense storms that have caused serious flooding in several towns.

The Galician region of A Coruña, in northwestern Spain, has experienced the worst floods in its history; hundreds of people have to be evacuated by boat from their homes on Wednesday.

The town of Sada on Spain’s northwestern coast was particularly badly hit, with 200 residents having to be evacuated.

The town has declared itself a “catastrophe zone” and a cleanup operation was in place as the waters receded on Thursday.

“We noticed the water rising at about 7am,” Jessica Fraga, who was evacuated from her house by boat with her two children, told regional newspaper La Voz de Galicia.

Estefanía Endrino chose to leave her building by boat with her five-year-old son.

“I was with my cousin at home and he stayed, but I went down because I couldn’t leave any other way,” she said.

The town of Carballo was also badly affected, with three people having to be evacuated and some of the heaviest rainfall in the region – 70 litres per metre squared according to sources from the region’s weather agency, Meteogalicia.

And other areas of Spain did not escape the bad weather. Many towns saw the temperatures plunge over night between Wednesday and Thursday.

There was snowfall in Valladolid on Thursday morning (see video above), while in Burgos, people uploaded photos of the heavy snowfall (see below).

Strong currents and rain further south in Spain contributed to another incident on Wednesday, when a 13-year-old boy was swept away while trying to retrieve a ball from the river Sil in the town of Ponferrada, León.

Rescuers found the body of the boy and managed to rescue his 17-year-old brother, who had gone into the water to try to help his younger sibling.