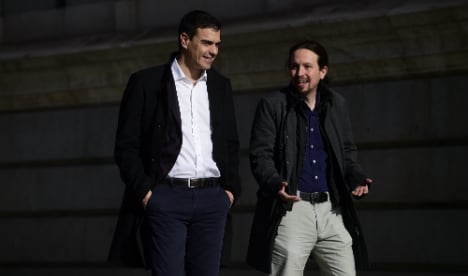 “There is a desire for an agreement and a desire for dialogue,” Socialist leader Pedro Sanchez told reporters after meeting with Podemos head, Pablo Iglesias.

Earlier Iglesias told a separate news conference he was prepared to give up his demand that he be named deputy prime minister in order to form a coalition with the Socialists.

“I will lead the group of Podemos negotiators to reach this agreement,” Iglesias said after a two-hour meeting with Sanchez.

Spain has been locked in political paralysis since December's elections put an end to the traditional two-party system, leaving a hung parliament divided among four main parties, none of them with enough seats to govern alone.

The Socialists, which came second in the election, have reached a pact with centrist Ciudadanos, which came in fourth, but have so far not been able to win the support of Podemos which would give it a majority in the assembly.

Podemos came third with 65 of the parliament's 350 seats, giving it considerable clout in subsequent coalition talks – so much that it blocked an attempt by the Socialists to form a government with Ciudadanos in a parliamentary vote of confidence on March 4th.

The gridlock is such that new elections could be held in June if no power-sharing agreement is found by May 2nd.

Acting Prime Minister Mariano Rajoy's conservative Popular Party (PP), in power since 2011, won the most votes in the election but lost its absolute parliamentary majority.

But no other party will ally with the PP, which has been tainted by a series of graft scandals and whose popularity was hurt by unpopular austerity measures it put in place while in power.