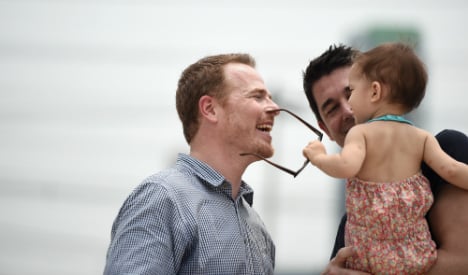 Manuel Valero, from Spain, and his American husband Gordon Lake, both 41, were blocked from leaving Thailand with their daughter Carmen after the surrogate refused to sign necessary paperwork following the birth last January.

The two men, who live in Spain but are currently caring for the child in Bangkok, have spent the past 14 months fighting a custody war knotted by recent changes to Thailand's surrogacy laws and the fact that the kingdom does not legally recognise same-sex marriage.

“Our lives have been practically destroyed this past year,” Lake said after the final witness hearing wrapped up on Wednesday, adding that months of legal bills had left the couple's finances in shambles.

Their other child, a son, has spent the past year living with Valero's sister in Spain.

“It kills us inside that they are not together,” Lake, who is Carmen's biological father, told AFP.

The surrogate, Patidta Kusonsrang, has shied from the media and did not speak to the press following the trial.

Thailand for years hosted a thriving yet largely unregulated international surrogacy industry popular among same-sex couples, but a string of scandals in 2014 spurred the military government to ban foreigners from using Thai surrogates.

One high-profile case saw an Australian couple accused of abandoning a baby with Down's syndrome carried by a Thai surrogate while taking his healthy twin sister. In another, a Japanese man was controversially found to have fostered at least 15 babies with surrogates.

Although the new law came into effect after Carmen was born, Valero and Lake's trial began afterwards.

Their lawyer told AFP a clause in the legislation offers a way out for couples whose children were born before the law, but it refers to a “husband and wife”, leaving judges to decide whether the provision applies to a same-sex marriage.

“The spirit of this act is to protect children. So for the benefit of the child I think she should be with her biological father,” said the lawyer Rachapol Sirikulchit.

A verdict is scheduled for 26th April.

The couple has also filed a defamation case seeking financial compensation from the surrogate and her legal aide, who they accuse of trying to “destroy our lives by telling lies”.

“We came with a suitcase for three weeks,” Valero told AFP outside the courtroom in Bangkok, referring to January 2015 when Carmen was born.

“Hopefully we will go back to Spain before she is 16-months-old”.