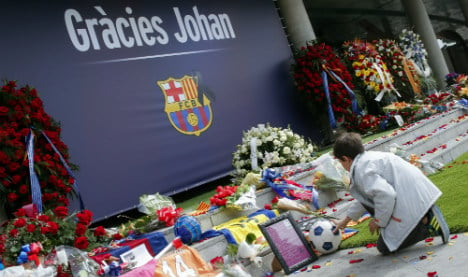 A memorial has been set up at the Barcelona stadium. Photo: Pau Berrena / AFP

Barcelona coach Luis Enrique on Tuesday praised the club's former player and manager Johan Cruyff as having embodied “spectacular football and results”, as he visited a memorial in honour of the
Dutchman at Camp Nou on Tuesday.

“To talk about Cruyff is to talk about football at its best,” said Enrique, who was accompanied by two of Barcelona's star players Sergio Busquets and captain Andres Iniesta. Barcelona's first team visited the memorial after training on Tuesday morning, during which the players observed a minute's silence in honour of Cruyff who died last Thursday aged 68 after a battle with lung cancer.

“(Cruyff) leaves behind a very important legacy, a legacy that his club will perpetuate, we want to copy and improve this style of play which combines results and a spectacular attacking football,” said Enrique.