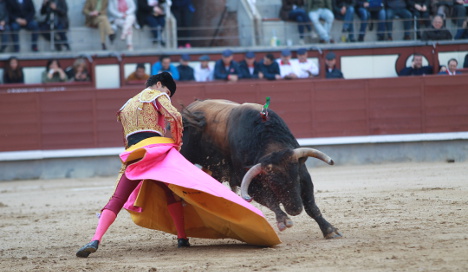 Spain could lose an estimated €3.6 billion a year if it banned bullfighting according to data from the National Association of Bullfighting Organizers (ANOET).

The figures, quoted by Europa Press, are based on the 6.1 million tickets sold last year as well as the 199,000 jobs and 57,000 positions directly linked to bullfighting.

“Many tourists who come to Madrid include in their tour a trip to Las Ventas [bullring] to view the bullfights,” said adviser and spokesman for the regional government, Ángel Garrido, to Spanish media.

“At a time when employment is so necessary, we have to strengthen whatever cultural, touristic aspect, of whatever nature, that allows us to increase the number of businesses and jobs in Madrid.”

About 900,000 visitors attended various events offered at Las Ventas last season with 80,000 taking part in a tour of the arena itself. The city has also reopened the bullfighting museum after renovations and expects more than 100,000 visitors there.

The towns in the Community of Madrid celebrated a total of 942 bullrunning events last year with more than one million spectators.

Spain's tradition bearers have long locked horns with animal-rights activists, who have called for bans on the centuries-old practice of bullfighting.

Carmena also scrapped an annual subsidy to a bullfighting school because it “goes against animal rights”.

But Garrido told reporters that the regional government now wants to create a new school.

Catalonia banned bullfights event in 2012 after the Canary Islands became the first region to pass a ban in 1991.

Still, San Sebastian brought back bullfighting after it was outlawed for three years.