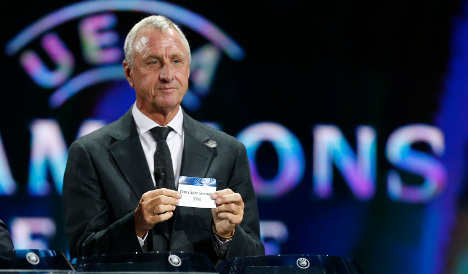 Cruyff was one of the most exciting and gifted players ever to take the pitch, winning almost everything at club level in a glorious career not only as a player but also as a coach with Ajax and Barcelona.

The Dutchman was also the lynchpin of the Holland side, the driving force at the heart of his nation's push to the World Cup final in 1974 where they lost a narrow and hard fought match 2-1 to West Germany.

What the Dutch did win was a great deal of admiration for their idea of “total football”, which first attracted attention at that time along with Johan Neeskens and Ruud Krol.

It was to be his only appearance at a World Cup.

After that run to the 1974 final he won the third of his three Ballon d'Or titles as he towered above the European game, having led Ajax to the European Cup three times in 1971, 1972 and 1973.

Cruyff had it all – vision, speed, passing ability and the knack of getting into attacking positions, a genius that resulted in 33 goals in 48 games at national level.

He once said that he sometimes preferred to hit the post than score, so much did he love the sound, and always said he was in the sport for its beauty, rather than merely to win.

He turned professional at 17 and quickly made the number 14 shirt one to be feared as he progressed through the ranks of Ajax, becoming the leading scorer in Holland in only his third season with 33 goals.

Ajax's success in Europe made Cruyff a household name, and when his compatriot Rinus Michels held the reins at Barcelona, he tempted Cruyff to try his luck in Spain.

He guided the Catalan club to their first Spanish title in 14 years in 1974 and made it a double success when they added the domestic Cup.

Tempted by the financial rewards of the North American Soccer League, he had brief spells with teams in Los Angeles and Washington, before returning to Ajax.

When his playing days ended in 1984 he embarked on a successful career as a coach, beginning – inevitably – with Ajax.

He led the club to consecutive Dutch Cups and was also at the helm when Ajax won the Cup Winners' Cup in 1987.

He then took over at Barcelona, where he cut an unmistakable figure, chain-smoking on the sidelines. He won four straight Spanish titles from 1991-1994 there and the 1992 European Cup with Pep Guardiola at the heart of his side.

It was during that time that Cruyff underwent heart surgery in 1991, at the age of 44 years, and first gave up smoking.

It was revealed in October 2015 he had lung cancer and in February he told the Dutch press he thought he was winning his battle.

“Right now, I have the feeling that I am 2-0 up in the first half of a match that has not finished yet.”